A LOCAL AUTHORITY failed to carry out any environmental impact assessment before destroying a biodiverse wetland and killing thousands of animals at a park in Dublin.

South Dublin County Council (SDCC) has also said it has no record of any ecological surveys undertaken in the area.

The destruction of the wetlands caused outrage after tonnes of silt were spread on the site, which had developed into a thriving ecosystem.

The revelations feature in documents obtained by Noteworthy, TheJournal.ie’s investigative platform, through an Access to Information on the Environment (AIE) request.

The wetlands, which had been used as a dumping ground for silt, had rewilded over the past two decades and were home to many protected species including newts, frogs, bats, butterflies, insects, bees, spiders and critically endangered European eels.

However, the land was flattened by SDCC during a planned desilting and cleaning of the lakes, and the animals were buried. Predatory mammals including badgers, foxes and pine martens lost their feeding grounds.

The Herpetological Society of Ireland has described the incident as “environmental vandalism”.

In a letter sent to local councillors, Teresa Walsh, director of environment, water and climate change at SDCC, admitted that “it was not the council’s intention to spread the excavated material”.

“Regrettably, there was a miscommunication with the operator in relation to the mounding of the soil … sifting through the soil mounds led to it being further spread over a larger area than had been identified as acceptable,” she wrote.

The council hired a contracting company to do the work at a cost of €20,675.66, according to invoices released as part of the request.

South Dublin County Council received over thirty complaints from members of the public and from local councillors about what had happened at Sean Walsh Memorial Park.

Fianna Fáil Councillor Teresa Costello told the council that she was “absolutely inundated with people contacting me, utterly devastated” while independent councillor Guss O’Connell said that he did “not consider the statement from the [SDCC] communications unit as addressing the issues raised”. 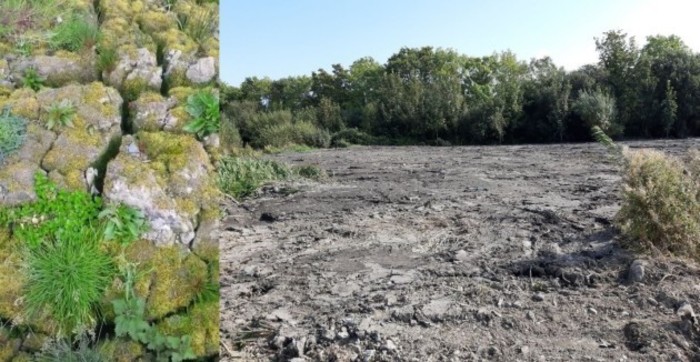 Before / After: Wetlands at Sean Walsh Park
Source: Collie Ennis

The Environmental Protection Agency (EPA) also received complaints from members of the public, alleging environmental damage. The agency has requested SDCC to provide a preliminary report on the works carried out at Sean Walsh Memorial Park, including an overview of the activities that were completed by or on behalf of the council.

Separately, the Department of Culture, Heritage and the Gaeltacht has raised concerns about “potential breaches of the Wildlife Act 1976”, while An Taisce’s Advocacy Officer, Ian Lumley, has also requested an investigation.

Following the destruction, the council has hired a consultant ecologist to carry out a detailed examination of the site and assess how to rehabilitate and recolonise the area.

A preliminary report prepared for the council says that wildlife began recolonising the area within a month of the destruction and that “it is estimated the entire area will be re-vegetated within a year”.

Solicitor Fred Logue, who specialises in environmental law, said that he felt the local authority should have at least considered carrying out an environmental impact assessment. However, he said, this is complicated by part eight of the planning regulations, which stipulate when a council should apply for planning permission.

The council itself took a decision that, as the material excavated from the pond was “uncontaminated soil and reused within the boundaries of the park area, SDCC deemed the material not to be a waste in accordance with European Communities (Waste Directive) Regulations 2011”.

If the material had been considered as waste, or removed from the site, SDCC would have been obliged to follow a more structured consultation and planning procedure.

Ian Lumley, heritage officer with An Taisce, said that SDCC carried out its actions without any environmental consideration. He said: “There was a total internal … failure. They should have done an initial screening as to whether an environmental impact assessment was necessary. If you are moving land, material or changing the use of land, an EIA should be screened for.

“If a private developer did this, they would be hauled to court, fined and subjected to a requirement to remediate. There should be a greater onus of responsibility on public bodies and public land.”

25.09.2019Investigation into whether frogs, eels and bats were buried alive by silt spread on Tallaght wetlands
22.09.2019'A punch in the gut': Outrage as wetlands area in Tallaght is destroyed

They added that the material excavated from the pond was “uncontaminated soil and reused within the boundaries of the park area” and so was not deemed to be waste.

Despite this, the council confirmed that the material contained a “very small portion” of litter. They did not reply to a query on the nature of the “miscommunication” with the contractor.

Cut Down to Size

Do you want to know more about local authority destruction around Ireland?

Through Noteworthy, we want to do an investigation into the level of tree-cutting that has been taking place across the country over the past number of years.

We want to try to find out what is behind it – whether it is public safety or whether county councils are responding to pressure from the insurance industry.

Find out more about how you can support this investigation here.

LIFT OUT: When is public transport going to be fully accessible to people with disabilities?
Ireland
Access to public transport has been highlighted as a problem in Ireland for many years with notice needed for commuter trains, numerous bus stops inaccessible, some areas not covered by any service and accessible taxis in short supply.
39 Backers raised €750 of €1200
Learn More
Open

ENDANGERED SPECIES: Can Ireland halt the decline of its precious biodiversity?
Ireland
Ireland’s biodiversity is under threat. According to a report from last year, 85 percent of our EU protected habitats are in an “unfavourable” condition and 46 percent are showing ongoing decline.
31 Backers raised €1040 of €1800
Learn More
Search for Proposals