ONE OBSTACLE FACING platforms – such as ours – that focus on issues not often reported by the media, is that to cover these properly often requires complex and in-depth journalism.

The traditional ways of telling stories in a digital format – either online or through apps – include using text, graphics and images. However, how can we tell these important stories in a way that has more impact and reaches more people?

At Noteworthy, we also source the initial ideas for investigations from you – our community – and once developed, put these projects back out to you for crowdfunding.

So improved engagement with readers and our community of supporters is also a vital part of this process.

And now for the good news… It has just been announced that Noteworthy is one of the recipients of the Google News Initiative Innovation Challenge.

This funding will enable us to develop new ways of communicating complex in-depth stories in a digital environment, and so, help us to improve the impact of our investigations.

The Innovation Challenge for Europe was open to publishers with smaller newsrooms that produce original journalism, and whose projects focus on creating a more sustainable and diverse news ecosystem.

There were 605 applicants and 47 selected projects, with Noteworthy being the only recipient from Ireland.

Impact of your ideas

As you can see, Noteworthy is constantly looking for ideas on how to improve… but most importantly, our work almost always starts with your ideas.

Since we began, our community of readers and supporters have asked us to examine a wide range issues that impact local communities or affect numerous people across the country. 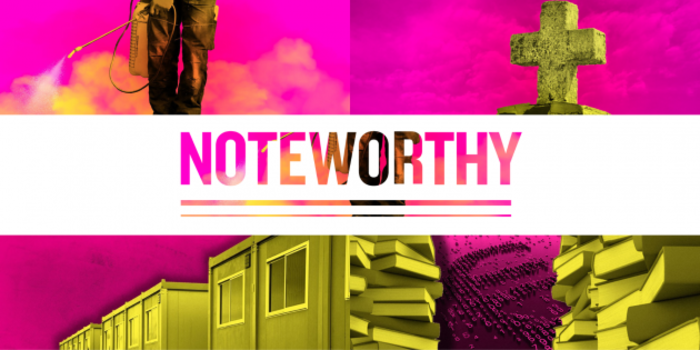 So how does it work?

For our last investigation – IN THE WEEDS, we were contacted about weedkiller use and sale by two seperate readers. When we initially looked into this, we decided to focus the project on examining: How toxic is the use of weedkillers at home and by public authorities?

A few months of work was needed after this project was crowdfunded… and just last week, we revealed that a herbicide linked to cancer – glyphosate, found in the popular weedkiller Roundup – was still the ‘backbone of weed control’ for many councils across Ireland.

Data we compiled on spending and weedkiller use – broken down by each local authority – was included in our results and this was picked up by a number of radio stations and news sites, increasing the impact of our investigation.

Send us YOUR IDEAS

Our investigation before this – HOLY LAND – was no different. It all started with an idea sent to our team by a reader who asked us to examine the sale of land by a particular religious order involved in historic abuse.

Again, we developed this idea and expanded it to find out: How much money are religious orders pocketing from lucrative property sales?

Similarly, once the project was crowdfunded, we set to work. This time, we joined forces with The Journal team and found that religious orders involved in redress sold properties totalling €90 million since 2016.

In addition to our investigations being picked up by other media outlets, our findings have been raised in Dáil debates and used by advocate groups. We have also won multiple awards for our work and – importantly – received praise by seldom heard and diverse groups whose ongoing challenges – and often lack of support – have been exposed by our findings.

And it all starts with you…

So, join us on our quest to innovate investigative journalism and find new ways to tell the stories that most impact you.

Let us know what you would like us to delve into here: