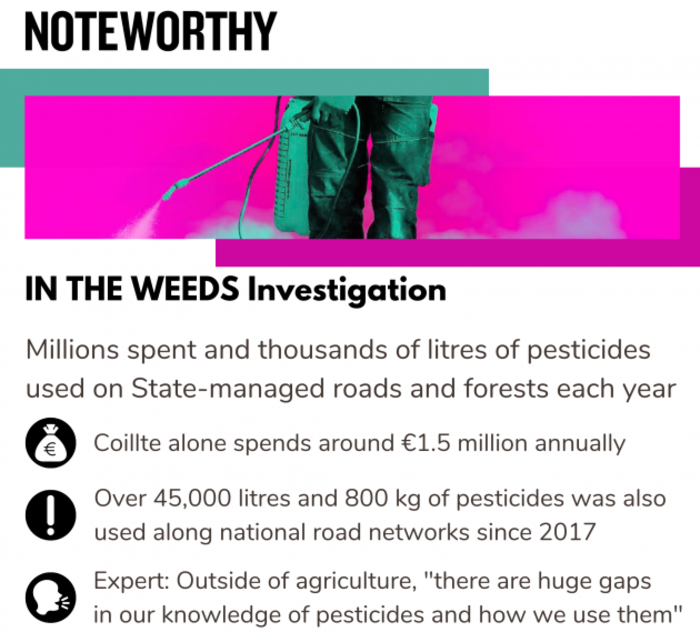 AROUND €1.5 MILLION is spent on pesticides annually by State-owned forestry company Coillte, Noteworthy can reveal.

Most of the pesticides used – about 10,000 litres – were based on glyphosate, the controversial chemical found in popular weedkiller Roundup which the International Agency for Research on Cancer (IARC) has determined is “probably carcinogenic to humans”.

Despite concerns about the impact of pesticides on human health and the environment, little is known about pesticide usage in roads, amenity and forestry settings.

The investigation team also found that over 45,000 litres and 800 kg of pesticides were used along Ireland’s national road networks since 2017.

This is in addition to 12,200 eco plugs – capsules containing weedkiller that are inserted into tree stumps to kill them – used to control vegetation on these roads. 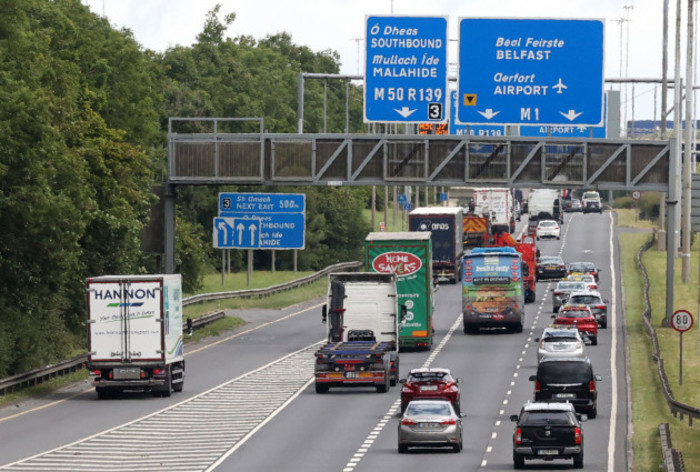 Pesticide usage figures from January 2017 to May 2022 along the national road network (roads with N or M) were obtained from Transport Infrastructure Ireland (TII) through Access to Information on the Environment (AIE) requests.

TII told Noteworthy that this network includes over 5,300 km of carriageway, of which a quarter – or almost 1,300 km – is maintained by parties contracted by TII, and the remainder maintained by the relevant local authority.

Purchase records – also obtained via AIE - reveal that over 2,400 litres and almost 4 kg of pesticides were used on Luas lines from January 2020 to May 2022.

Pesticides are also used along railway lines by Irish Rail, but they did not respond to our AIE request asking for details of the types of pesticide and amounts used, despite multiple reminders.

Records released via AIE reveal the chemicals used by Coillte in 2020 and 2021 in its estates and recently afforested sites are glyphosate, acetamiprid, clopyralid, triclopyr and sheep fat.

This figure only relates to the active ingredient, the substance which kills the weeds, but this is just one of the ingredients mixed into a pesticide product.

Coillte “occasionally” use chemicals, “on a site-by-site basis, necessary to control invasive species such as Rhododendron and Japanese knotweed, but the amount of chemicals used in forestry is very low and would represent only a small fraction of the amounts used in other sectors,” such as agriculture, the spokesperson added.

“We are committed to reducing our use of chemicals even further. In terms of vegetation control, we are trialling non-chemical alternatives.”

Insecticides such as acetamiprid are sometimes used on trees “in the first years of growth” to control “damaging insects”, such as the large pine weevil, and herbicides are used to control competing vegetation while trees are getting established, the spokesperson said. “If left untreated, the pine weevil can cause very substantial tree plant mortality.” 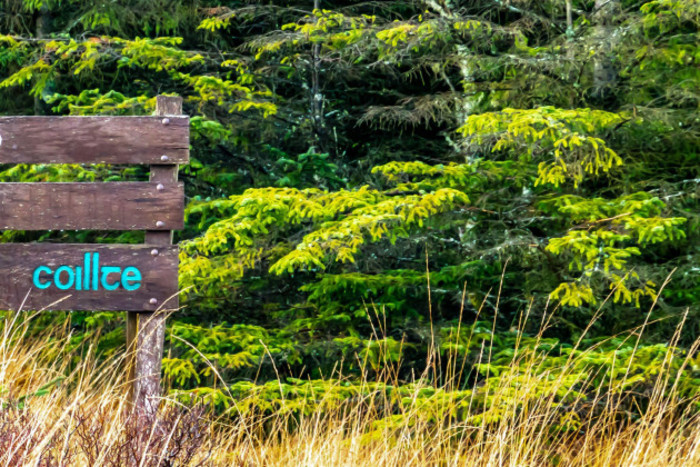 Lack of data outside agriculture

Coillte lands include 91,500 hectares of Special Areas of Conservation (SACs) and Special Protection Areas (SPAs). The Sustainable Use of Pesticides Directive requires alternatives to pesticides to be prioritised for areas used by the public or vulnerable groups, as well as environmentally sensitive areas, such as SACs and SPAs.

For these areas, the spokesperson said that an integrated pest management strategy and a decision support system are used to determine whether pesticides are needed or if manual treatments are enough. Risk assessments for each of the chemicals used were also released to Noteworthy.

20.09.2022The Explainer x Noteworthy: How much weedkiller are councils using?
20.09.2022'It was sprayed in the playground': Widespread use of chemical weedkillers by councils
18.09.2022Inspections found issues in how nine out of 10 vendors handled deadly pesticides

Coillte told us they don’t use chemicals on publicly accessible areas such as public trails, or areas used by vulnerable groups, instead “preferring manual and mechanical methods of vegetation control”.

Henriette Christensen, senior policy adviser with Pesticides Action Network Europe, said that it remains to be seen whether the recently proposed EU-wide ban on pesticides in all public areas and protected nature sites will be accepted and how it might be transposed into Irish law.

She told Noteworthy that, in some EU countries that have banned pesticides in public areas, the ban also applies to areas of public land that are rented for private activities.

A big issue, according to Dr Dara Stanley, lecturer in applied entomology at University College Dublin, is that most countries only collect pesticide usage data is for agriculture. The researcher is currently leading two major projects examining pesticides and bees.

“For most European countries, and this is certainly the case in Ireland, we do not have any available data on what pesticides are used in amenity settings by councils, in urban environments, domestically by people at home in their own gardens, or in forestry.”

Stanley added that these settings represent “huge gaps in our knowledge of pesticides and how we use them in Ireland”.

Part two of this series shows that government inspections found issues in how nine out of 10 vendors handled pesticides. Our final article reveals widespread pesticide use by councils.

Our IN THE WEEDS investigation was carried out by Anthea Lacchia. It was proposed and funded by readers of Noteworthy, the investigative journalism platform from The Journal.

You can support our work by submitting an investigation idea, funding a proposed project or setting up a monthly contribution to our general investigative fund HERE>>

We also have a number of other projects related to health and the environment.

BIRTH PLACE: Why does the Irish health service offer so little choice for expectant mothers?
Ireland
In 2015, the National Maternity Strategy said “there is a lack of choice for expectant mothers” by international standards. It proposed a model of care that “represents a fundamental overhaul of services” which are currently “largely consultant-led and hospital-based”.
43 Backers raised €1448 of €2030
Learn More
Open

REVOLVING DOOR: What influence do former politicians have in Leinster House?
National
In recent years, several former ministers and other politicians have also ended up working as lobbyists across a range of business interests.
50 Backers raised €1360 of €2960
Learn More
Open

SPECIALIST CARE: Are we looking after our intern doctors and specialist trainees?
Ireland
During their years of training, doctors often work excessive hours and experience poor work environments in the Irish healthcare system.
34 Backers raised €970 of €2430
Learn More
Search for Proposals