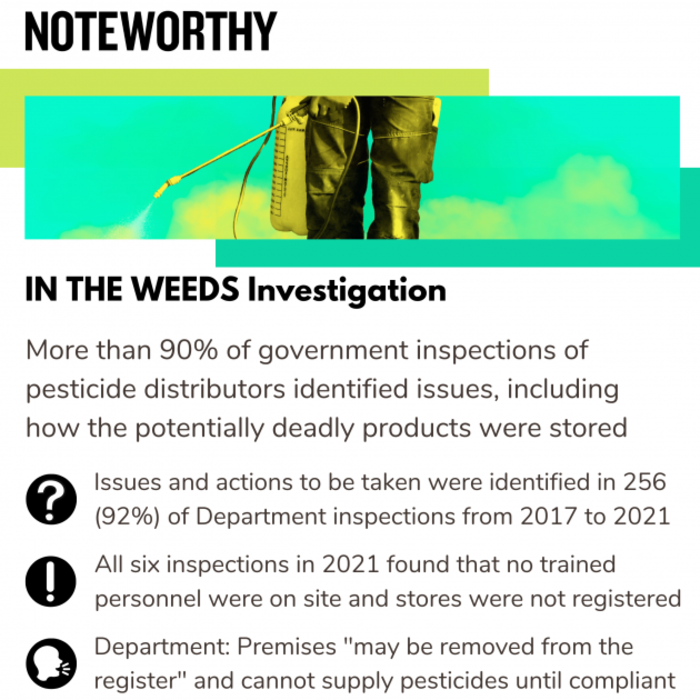 THE VAST MAJORITY of pesticide retailer and wholesaler inspections in recent years identified issues or actions to be taken, according to records seen by Noteworthy.

Issues with products sold, staff training, record keeping or registration requirements were found in 256 (92%) of the 278 inspections by the Department of Agriculture, Food and Marine’s (DAFM) .

As part of EU and Irish law, in order to sell pesticides, retailers – such as hardware stores and garden centres – must apply to be included on the DAFM list of registered stores, and all pesticide distributors, including retailers, suppliers and wholesalers, must train and register with DAFM.

But all six inspections which took place in 2021 found that no trained personnel were on site and that the stores were not registered with DAFM. A single inspection took place in 2020 and it identified unapproved products were for sale.

In Ireland, DAFM’s Pesticide Registration and Controls Divisions are responsible for enforcing regulations on plant protection products (PPPs) – all collectively referred to as pesticides – which include herbicides, insecticides, fungicides and biological controls.

Around 30 inspections of end users including retailers, golf clubs, landscapers, and wholesalers are conducted each year. This is in addition to about 1,400 inspections annually on farms, DAFM told Noteworthy. The spokesperson added: 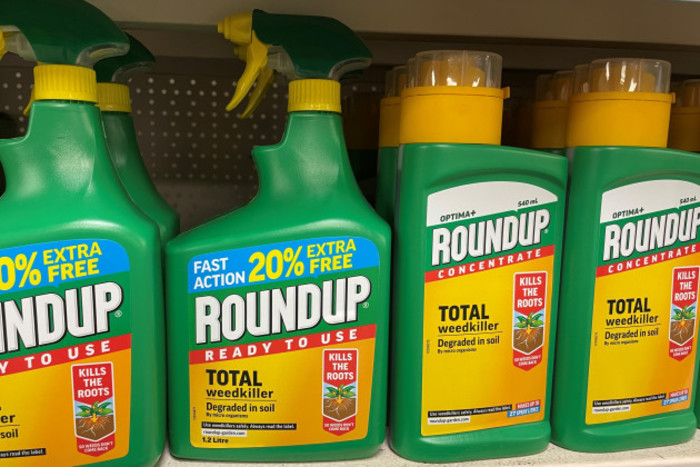 Glyphosate – a chemical found in weedkillers such as Roundup – is 'probably carcinogenic to humans', according to the International Agency for Research on Cancer (IARC)
Source: Anthea Lacchia via Noteworthy

We obtained copies of DAFM distributor inspection reports since 2017 through Access to Information on the Environment (AIE) requests (scanned reports can be viewed here).

In 2019, all but three of the 99 inspections carried out found that further actions were needed to bring the sellers in line with EU rules, with just under half mentioning a lack of records of pesticide sales, a lack of trained staff, or an issue with registration of the store or personnel with DAFM.

Recent guidance from DAFM requires wholesalers and retailers of pesticides to keep records of their sale for a period of five years. This includes additional details for professional users, with only a specific list of products approved for amateur use.

Almost all inspection reports also cited actions relating to pesticide products. Common issues included: unapproved products for sale that should be returned to the supplier, revoked products on sale that need to be disposed of as hazardous waste, lack of PCS number (assigned to approved products) or inappropriate labelling of pesticides.

In its guidance for distributors, DAFM states that if “remedial actions” are found to be necessary during an inspection, these “must be undertaken within a specified time limit”. It continued:

“If the necessary remedial actions are not undertaken, the premises will not be included or may be removed from the register and cannot be used as a distribution point” – a place where pesticides “may be sold or supplied” – until it is re-inspected and “found to be in compliance with the required standard”.

‘Nature is not just green’

One report noted that appropriate signage should be placed in the store entrance.

“There should be a clear warning sign on the shelf where the pesticides are saying it’s a criminal offence to spray in areas used by the general public,” said James Walsh, whose petition seeking to ban chemical herbicides in public areas gathered over 5,000 signatures and was considered by the Joint Oireachtas Committee on Public Petitions.

“People don’t want to break the law. [But] if it’s not being enforced and they are not being made aware of the legislation, it’s never going to stop,” he said.

20.09.2022The Explainer x Noteworthy: How much weedkiller are councils using?
20.09.2022'It was sprayed in the playground': Widespread use of chemical weedkillers by councils
16.09.2022Thousands of litres of pesticides used on Irish roads and forests each year

“In Ireland there is a perception that gardens must be clean, with the grass cut, but unfortunately that’s very bad for the bees and generally for other insects,” said Elena Zioga, a PhD student at Trinity College Dublin who is researching pesticide contamination in flowers as part of a multidisciplinary project on pesticides and ecosystems.

“Nature is not just green, it’s colourful. The colours, flowers and wild plants are there for a reason… apart from the fact that it’s really nice to notice the changing seasons defined by the different colours of flowers,” she said.

When it comes to applying chemical herbicides in private gardens, she recommended against it and suggested letting grass and wildflowers grow.

“Really small changes can help,” she said, such as reserving a small area of your garden for wild flowers and native species. “But definitely stay away from chemicals – that’s just devastating.”

Part one of this series finds thousands of litres of pesticides are being used on Irish roads and forests each year. Our final article reveals widespread pesticide use by local authorities.

Our IN THE WEEDS investigation was carried out by Anthea Lacchia. It was proposed and funded by readers of Noteworthy, the investigative journalism platform from The Journal.

You can support our work by submitting an investigation idea, funding a proposed project or setting up a monthly contribution to our general investigative fund HERE>>

We also have a number of other projects related to health and the environment.