IRELAND’S LARGEST SALMON farm operator has been granted a licence for a large 18-pen farm in Bantry Bay after a protracted six-year appeal process and strong opposition from locals, campaign groups and environmental NGOs.

The licence, granted this week by the Aquaculture Licences Appeals Board (ALAB), gives Mowi Ireland permission to set up the farm close to Shot Head capable of holding hundreds of thousands of fish.

The company will have permission to harvest up to 2,800 tonnes of salmon over a 24-month production cycle, with no restriction on the timing of harvesting.

Mowi Ireland is part of Mowi Group – the world’s largest producer of farmed salmon – and is responsible for around 80% of Ireland’s production. It already salmon farms at Ahabeg and Roancarrig on the western side of the Bay.

The company said that the decision will allow it to make an investment of €6 million and create eight new jobs in the area. The site, it said, is expected to be set up in 14 weeks.

Mowi made an application for the salmon farm site in early 2012 and, in 2015, the Minister for the Marine granted a licence for the operation that was appealed to ALAB.

There is strong opposition to the proposed farm, with 13 appeals lodged by local residents, angling associations, environmental NGOs, and conservation groups, as well as Inland Fisheries Ireland.

The main ground for appeal was over concern that the farm would lead to an increased threat to wild salmon and sea trout from sea lice, an issue raised by nine appellants.

Sea lice are saltwater crustaceans, smaller than a fingernail that can impact juvenile salmon and sea trout when they go to sea. Exposure to sea lice at this stage can cause large-scale mortality events and reduce population sizes.

Various Irish and international studies have confirmed that sea lice from salmon farms can have a significant impact on sea trout and wild salmon populations.

Other key concerns raised include the potential threat to wild salmon from fish escapes, insufficient capacity for Bantry Bay to support additional aquaculture sites, and impact on both marine and freshwater habitats.

Further issues were raised in relation to the impact on tourism, the adequacy of environmental assessments carried out, and the public consultation process.

A decision has been delayed on several occasions as ALAB requested further details from Mowi on the potential impacts of the proposed farm. This included reports on any potential impact on several bird species, freshwater pearl mussel, seal and otter.

The board also found the original environmental impact statement (EIS) in 2011 was “inadequate in certain respects” and required Mowi to provide a supplemental EIS on the risk of sea lice infestation to wild salmon and the potential impact of waste on water quality.

Following its examination of all the requested reports, the Board concluded that the farm will “not have significant effects on the environment” and has now granted the licence. 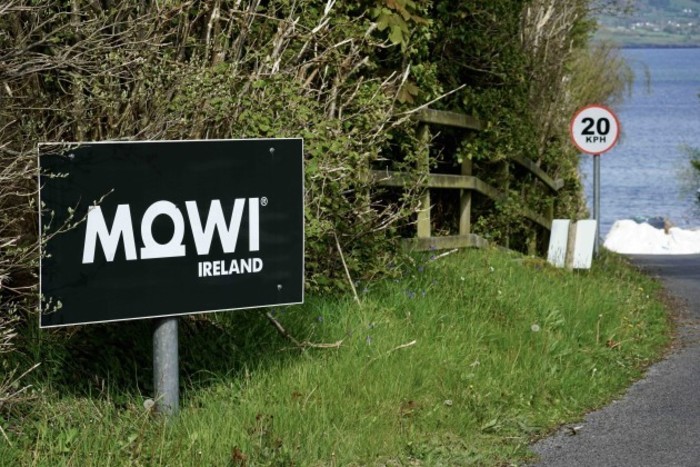 Mowi is the largest Atlantic salmon producer in the world
Source: Maria Delaney/Noteworthy

The Board said that it had considered this and determined that Mowi’s “corporate compliance history and competence for operating within Ireland is a matter for direct consideration by DAFM as part of the oversight of any licence”.

Noteworthy’s recent investigation revealed that the Department of the Marine has previously raised concerns that Mowi overstocked farms or harvested higher levels of fish than allowed for under conditions in its licences.

Records were released to Noteworthy by the Department show that it was examining cases at Mowi farms in Deenish in Co Kerry, as well as Anny Point and Lough Altan in Co Donegal, and its Inishfarnard site in Co Cork.

Although expert staff recommended the revocation of licences in each case, the Department decided on a strategy of altered licence conditions in all but one case. It explained that the decisions “were arrived at following detailed consideration and review of the submissions made and all relevant information available”.

Mowi did not response to Noteworthy’s requests to comment on the specific cases but said it is “committed to producing more food from the ocean in a sustainable way, hence our commitment to organic salmon production in addition to the Aquaculture Stewardship Council environmental and social sustainability principles”.

‘Gutted’ with the decision

A spokesman for the conservation charity Friends of the Irish Environment, which is based on the Beara peninsula and appealed the original Shot Head licence decision, said this morning that the group was “gutted” by ALAB’s decision.

“Both operators and the opponents agree that the current licensing system is not fit for purpose and yet we continue to grant permissions under this infirm legal regime,” the group said.

“Penalties [for licence breaches] can not be graded, leaving the authorities only the option of shutting down farms, which is open to legal challenge. To allow yet more salmon farms without fixing the legislation is sickening – both for us and for Bantry Bay,” the group said.

A 2017 review of the aquaculture licensing system recommended a root-and-branch reform, including six-month time limits to determine licence applications, as well as more stringent enforcement proceedings for non-compliance with licence conditions.

Salmon Watch Ireland, another appellant, said it was “extremely disappointed” with the decision. The group added that it was not satisfied that the “best available scientific knowledge” was taken into account regarding the impact of sea lice on wild salmon.

“Salmon Watch Ireland will examine in detail the determination by ALAB before deciding our next course of action,” the group said in a statement to Noteworthy.

Galway Bay Against Salmon Cages (GBASC) said that it was “disappointed but not surprised” by the decision, that it sees as a “retrograde step in light of the international scientific research that shows that salmon farming can have a detrimental effect on wild salmon, sea trout and shellfish stocks”.

“GBASC will study the ALAB determination and consult with our legal advisors with the view to taking a Judicial Review against the ALAB decision,” it added.

Alec O’Donovan, the secretary of local opposition group Save Bantry Bay said that that decision was “a severe blow to the protection and survival of endangered salmon and sea trout numbers”.