THE NATIONAL PARKS and Wildlife Service granted 11 licences to salmon farms between 2015 and 2020 to cull normally protected seals by rifle shot, documents released to Noteworthy can reveal.

At least two grey seals and three common seals were killed, with data unavailable on the number of seals killed in most cases, according to records obtained by Noteworthy following a request for details of seals culls by salmon farms or hatcheries.

In 1914, grey seals became the world’s first officially protected species after they were almost hunted to population collapse. Both species are now protected under the EU Habitats Directive.

Despite their protected status, the Department of Housing - under which the National Parks and Wildlife Service (NPWS) sits - can issue licences to cull small numbers of protected wild animals deemed to be causing damage to property – in this case salmon stocks.

The salmon farm industry is the largest aquaculture sector in Ireland, worth an estimated €127 million last year. Farming takes place in large pens in sheltered bays with deep waters along the west coast.

Details on the seal culls were released following an Access to Information on the Environment (AIE) request as part of the Noteworthy Troubled Waters investigation into the potential environmental impacts of the industry.

Further articles out this week will examine the wider eco-impacts of the industry, as well as ongoing concerns over the licensing system that has allowed salmon farms to operate for over a decade with expired licences and without environmental assessment in line with EU law.

To view a searchable version of this table, click here.

The most recent licence was issued in August 2019, with most lasting for short periods of between one and two months, although two of the licences were granted for more extended periods of four and five months respectively.

Following the internal review, the Department provided Noteworthy with redacted copies of the 11 licences. Copies of the licences can be found here.

An examination of the licences shows that permission was granted in each case for the culling of either one or two seals by a stalker with the use of a rifle.

In all cases, the licence conditions stated that NPWS officers may carry out spot checks. Several licences also required the local conservation ranger to be contacted prior to the shooting event.

Applications are supposed to be investigated by local NPWS staff to determine if serious damage is being caused by the seals and the most practical method of controlling the problem.

The Department told Noteworthy that local staff do examine the requests from salmon farms before issuing a licence but could not confirm if site visits are undertaken in any cases.

It said that “regional staff of NPWS review the application and, where resources allow, would visit the site in question”.

“Each application is reviewed on a case by case basis and a decision is made based on the information to hand in the local area. Each licence also contains specific conditions that must be adhered to and they have a start and finish date also,” it said. 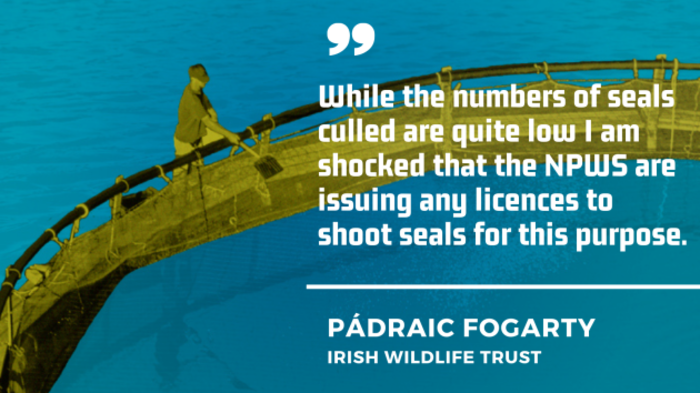 ‘Shocked’ that licences are issued

Speaking to Noteworthy, Pádraic Fogarty of the Irish Wildlife Trust said that, while the numbers of seals culled are quite low, he was “shocked that the NPWS are issuing any licences to shoot seals for this purpose”.

In Ireland, 8,000-10,000 grey seals and 4,000 common seals are found around the Irish coast with the largest populations along the west coast from Kerry to north Mayo and Donegal.

Fogarty said that culling of protected species “must only take place under the most exceptional of circumstances and protecting salmon farms is not among these reasons”.

Although the grey seal has been afforded protection since the early 1970s, Fogarty said that the species still faces “numerous threats including illegal persecution, entanglement in dumped plastic fishing gear, overfishing of their food supply and pollution”.

Melanie Croce, the executive director of Seal Rescue Ireland, said that staff come “face to face with the pressures that human activities are putting on seal populations” every day.

The group recorded their highest number of rescued seals last year, as well as a sharp rise in the number of dead seals from 102 in 2019 to 201 in 2020. So far this year alone, 168 cases of dead seals have been reported to the group.

To view a higher-res version of this map, click here.

‘No scientific support’ for cull

As seals are a highly mobile species which can travel hundreds of kilometres a day, Croce said that there is “no scientific evidence to support that [the] shooting of seals means that interactions between seals and a given fish farm will cease”.

Upon reviewing the cull licences released to Noteworthy, Croce raised concern about the extent to which compliance can be overseen and followed up by the NPWS.

“In our own interactions with the NPWS, it’s been clear that it is thoroughly overstretched and understaffed, and we have concerns about the capacity of too few rangers, covering too large of areas, to be able to provide sufficient oversight to ensure conditions of these licences are met,” she said.

The Department said that site visits are “not generally undertaken by NPWS staff due to resourcing issues and competing work priorities, but in many cases local staff would have intimate knowledge of the area”. In the case of the Sligo licences, they included site visits and meetings, it said.

“[The] NPWS do not have the resources to follow up on every licence that issues. Conditions are added to the licence and are expected to be adhered to. If there were any suspicion that this were not the case then this would be investigated,” it added. 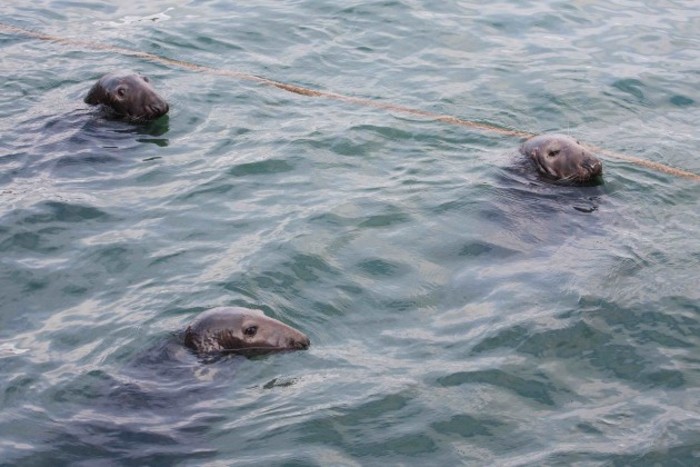 Last year, there was strong backlash over calls for the culling of seal due to the impact on the fishing industry.

In answering a question on the “seal population problem” by Kerry TD Michael Healy-Rae last September, the Minister for Housing Darragh O’Brien mooted a pilot scheme where seals would be shot to “determine its efficacy in protecting fishermen’s catches”.

Noteworthy previously revealed in its Net Loss investigation into the environmental impacts of our fishing industry that this pilot was proposed after the Department received licence applications to shoot seals from boats. The NPWS received six applications for licences in 2020.

The Minister soon distanced himself from the idea and received almost 50 letters and emails from the public, obtained by Noteworthy through Freedom of Information (FOI).

Almost all were opposed to a seal cull, with many expressing their ‘anger’, ‘disgust’, and ‘shock’ at the idea. One person asked if the Government was “hell bent on destroying our wildlife” while another asked if the Minister was “trying to win us the title of ‘European Capital of Cruelty’”.

In part two, we examine concerns with the State’s monitoring of salmon farming and potential impacts on the marine environment from sea lice, fish disease, and farm escapes.

This investigation was carried out by Niall Sargent of Noteworthy. It was proposed and funded by you, our readers.

We have a number of other biodiversity-related proposals which you can view here.

EXOTIC WASTELAND: Where do soft plastics in our recycling bin end up?
Ireland
Soft plastics can now be placed in Irish recycling bins following a change in policy in September 2021. But how much of this actually ends up being recycled on our island?
51 Backers raised €1075 of €1180
Learn More
Nearly Funded

SYSTEM OVERLOAD: The public health system was creaking before the pandemic - has Covid-19 broken it?
Ireland
At the start of 2021, Ireland had a backlog of thousands of positive Covid-19 tests awaiting validation.
46 Backers raised €1483 of €1840
Learn More
Open

FUELLING RETIREMENT: Are Irish pensions contributing to the climate crisis?
Ireland
In 2019, Ireland became one of the first countries in the world to divest its investment fund away from companies that make substantial profit from fossil fuels. However, the majority of private Irish pension funds still include companies involved in oil and gas exploration, extraction and refinement.
30 Backers raised €897 of €1240
Learn More
Search for Proposals