THERE IS “NO question” that there is ingrained institutional racism against the Traveller community in Ireland, Minister for Children, Equality, Disability, Integration and Youth Roderic O’Gorman has said.

In an interview with Noteworthy, as part of an investigative series into the challenges facing Traveller children in Ireland, the minister said a recent Children’s Ombudsman report on overcrowded and unsafe conditions at a Cork halting site was “just one example of that institutional racism”.

The report on the Spring Lane halting site found Cork City Council failed to consider the best interests of children living at the site, noting that there was a high rate of childhood illness caused by living conditions.

Minister O’Gorman said the State failed those children and “has failed successive generations of Traveller children” and the government wants to break that cycle. 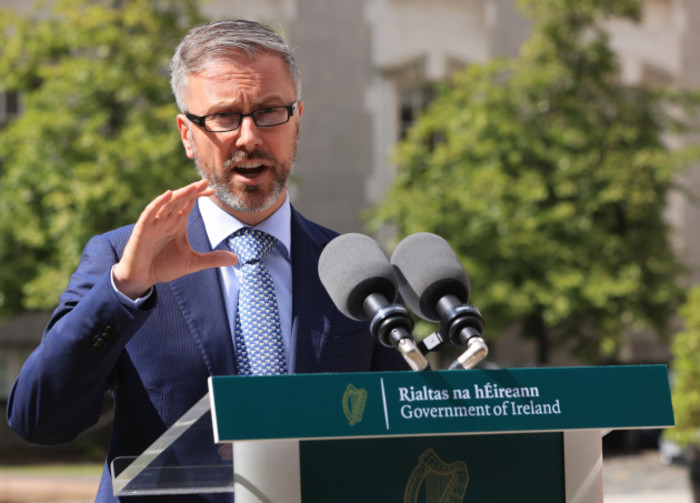 Following the publication of the report on the Spring Lane halting site, Cork City Council hit back at the findings. In a six-page letter to Minister of State in the Department of Housing Peter Burke, the council stated that the Ombudsman had not shown a  “complete understanding or appreciation of the complex problems and deep-rooted socio-economic issues” involved at the site.

Minister O’Gorman said he did not think there was any justification for the conditions reported at the site and he was “surprised to see that letter” from the council.

However he said work is being done to address the issues highlighted in the report, including a “significant package of investment” for maintenance of the site and the development of a new site next to it.

“There have been other interventions, because it’s clear there was a longtime breakdown and communication between Cork City Council and the residents, so I think mediators have been put in place to try and engage with those living on the site to see what their accommodation requirements are,” he said.

The council in its six-page letter had also pointed out that there was “very considerable resistance” from the neighbouring settled community to the opening of a local passageway, which would provide safe access to school for children living at Spring Lane.

“I think there’s a time when local politicians have to stand up,” O’Gorman said.

“I’ve seen that myself, we had a Part 8 vote on a small piece of Traveller accommodation in Fingal when I was on the council there, and very significant pressure was put on counsellors – and it was  by local community in the area – not to support this particular vote. The majority voted for the accommodation.

The Minister also spoke of the government-commissioned report, Out of the Shadows, conducted as part of the National Traveller and Roma Inclusion Strategy (NTRIS), which found that Traveller children feel “unwanted” in Irish society.

“It’s deeply disappointing that any child feels unwanted in their own country,” he said. “And it reflects that institutional racism that Travellers have experienced.”

The Minister said the way in which Travellers have been “marginalised in every engagement with the State” has seeped into the consciousness of the community. “This is one of the driving factors now, I assume, why the children are feeling this way as well.” 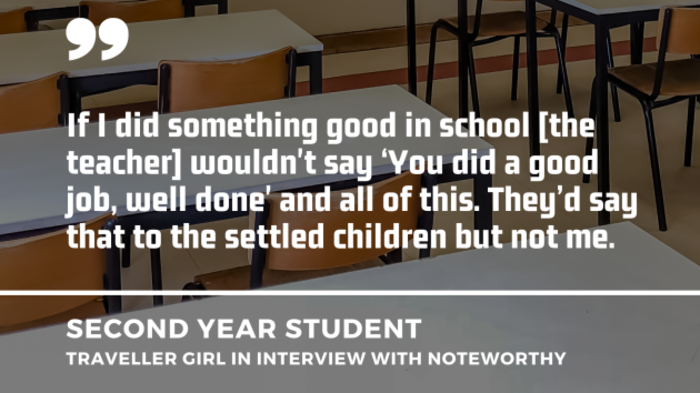 Noteworthy spoke to a number of young Travellers who were very ambitious, with career goals of being including being a vet, an electrician and a lawyer. And though their parents supported these ambitious, they felt unsupported by other adults, including their teachers.

The last census in 2016 showed that 13% of Travellers were educated to an upper secondary school level or above, but this was over 70% in the general population.

Last week, we reported that many teenage Travellers were not returning to school as they found remote schoolwork extra challenging due to lack of access to digital and other resources during the pandemic.

The Traveller children aged 12 and 13 that spoke to Noteworthy said they were already experiencing racism in school and shops. “Sometimes when I walk out of a shop they stop me and say ‘empty your pockets’,” one young secondary school boy told us.

A Traveller girl in secondary school said she hopes “things do change, because it’s not fair” at the moment.

When asked what his message to Traveller children would be, O’Gorman acknowledged that “Ireland has let down Travellers and has let them down over generations”. He added that “now is our opportunity to do something about that”.

This article is part of our TOUGH START investigation being led by Maria Delaney of Noteworthy and Michelle Hennessy of The Journal. Over the coming month, as part of this series, we will reveal systemic issues facing Traveller children in healthcare, education and housing.

This Noteworthy investigation was done in collaboration with The Journal. It was funded by you, our readers, with support from The Journal as well as the Noteworthy general fund to cover additional costs.

You may be interested in a proposed investigation which is almost funded – BLIND JUSTICE - where we want to look at the experience of Travellers in the justice system.