A PROJECT WHICH highlighted the challenges that face survivors of sexual violence when they attempt to officially report their experiences has won the prestigious Mary Raftery Prize.

The prize, for the best of Irish social affairs journalism, was won by Noteworthy, The Journal’s investigative platform and reporter Peter McGuire for the SPEAK OR SURVIVE series.

It was one of two Noteworthy projects to make it onto the shortlist for the 2020 prize (announcement delayed by the pandemic); reporter Niall Sargent was also shortlisted for his REAPING THE HARVEST project on migrant workers in the Irish horticulture sector.

Announcing the award this afternoon, the judges – Professor Mary Corcoran, Maynooth University, Pat Brennan (formerly of The Sunday Tribune), and Maeve Lewis (One in Four) – described SPEAK OR SURVIVE as “a very balanced, nuanced, blend of personal experience and policy analysis that spoke to the heart of an important matter of public importance”.

Reporter McGuire spent six months gaining the trust and chronicling the experience of over 40 survivors of sexual violence who attempt to secure justice or supports for their trauma. He researched court hearings, enlisted expert analysis – including that of a HSE whistleblower – and secured extensive supporting documentation for his findings.

The result tracks the journey of complainants through a range of institutions, ranging from the gardaí, social and youth services, mental health services through to the legal system.

The series, edited by Susan Daly, uncovered a number of challenges which need to be addressed for survivors to emerge from the trauma of their experiences, including a lack of specific treatment for victims of sexual abuse; institutionalisation of vulnerable people unable to advocate for themselves because of the impact on their mental health of trauma, and waiting lists of over a year for children in need of therapeutic support.

Several of the findings of the investigation aligned with and expanded on recommendations in the O’Malley report into the protection of vulnerable witnesses in sexual offences trials. 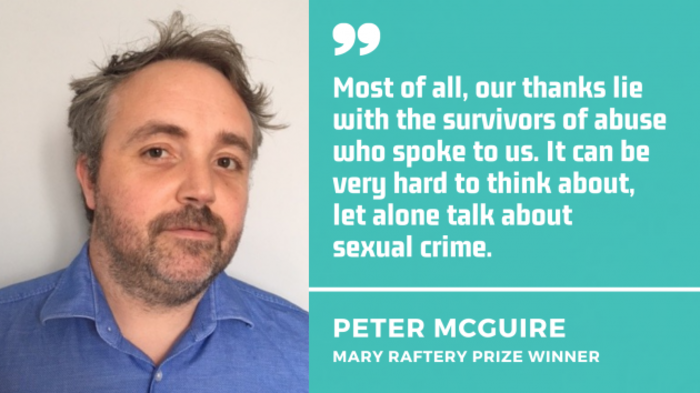 “I was privileged to tell just some of their stories: there were many more than we could do justice to,” added McGuire.

Another Journal Media project, the “superbly crafted and moving” Stardust podcast by Séan Murray, Nicky Ryan and Christine Bohan of The Journal, won the previous Mary Raftery Prize, for 2019.

Maria Delaney and Ken Foxe of Noteworthy had also been shortlisted for their collaboration on A Bridge Too Far – a series of articles examining the story of a controversial road scheme that divided Kilkenny city.

The chair of the judging panel, Dr Mark O’Brien of DCU, said the quality of the entries for the 2020 prize “made choosing an overall winner difficult, and that all the entries indicated a healthy public desire for talking about and resolving significant social issues”.

The other nominees shortlisted beside the two Noteworthy projects were:

The prize is awarded annually to an individual or small team responsible for social affairs journalism produced on the island of Ireland in the calendar year preceding the award which, in the view of the judges, combined the rigorous analysis and commitment to social justice that characterised Mary Raftery’s journalism, and resulted in a significant impact on society.

The prize is funded by a bequest from the Mary Raftery Journalism Fund, is sponsored by the Broadcasting Authority of Ireland, and is administered by the School of Communications, Dublin City University.