TEENAGERS WITH EATING disorders are finding themselves lost in transition to adult services in Ireland.

As part of a comprehensive focus on the distressing state of eating disorder (ED) treatment programmes and access here, Noteworthy has found that children with eating disorders are being failed by the public health system.

“As I turned 18, I went into the adult services and they said… there is nothing they can do with my eating disorder. They didn’t have a dietician or anyone that really knew what they were working with.”

Sinéad O’Loughlin lives in Wexford, one of the many areas of Ireland without a single eating disorder (ED) inpatient bed for adults. However, the children and adolescent mental health services (CAMHS) has dedicated ED beds in all four HSE regional units.

She is currently waiting to be admitted to a private residential centre that specialises in EDs – something she only has access to because of her private health insurance.

“If I was to go public, it would be just a matter of waiting until I land up in hospital rather than a [specialist] inpatient unit.”

The transition from child and adolescent to adult services was a key concern of parents as well as younger people with eating disorders that spoke to Noteworthy as part of our SILENT TREATMENT investigation into why people with EDs are being failed by the public health system.

All said they had had negative experiences, including relapses, or were parents fearing this transition if their child had not reached 18 – the age that people are moved out of CAMHS. This coincides with the average onset of anorexia (14-18), bulimia (14-22) and binge eating disorder (late teens to early 20s). 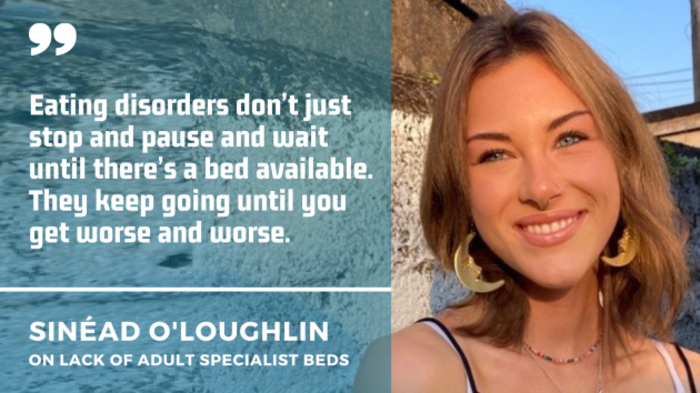 Jenny*, whose daughter Lisa* was diagnosed with anorexia three years ago, told Noteworthy that this “transition is non-existent”. There is no specialist ED team in their area in the west of Ireland and Jenny is worried about the move to a general hospital which she said is a “horrible environment” for a person with an ED.

“She’s going to get a psychiatric assessment in a couple of weeks, but there is a waiting list for any kind of therapeutic support,” said Jenny.

Since she was diagnosed with an ED, Lisa spent five months as an inpatient, including time being fed by a nasogastric (NG) tube through her nose in a general hospital. “That was our worst experience,” explained Jenny, due to the “lack of knowledge [of EDs] in medical hospitals”.

Lisa, who turned 18 last year, was discharged from CAMHS and had to wait nine months for this initial appointment with adult services. “She has gotten worse in the waiting period,” explained Jenny. Being in her Leaving Cert year, she said “it’s a bad time to be left hanging in the balance”.

Because she was very sick, CAMHS did see her in the interim, but not on a weekly basis which is the care she was receiving before being discharged. 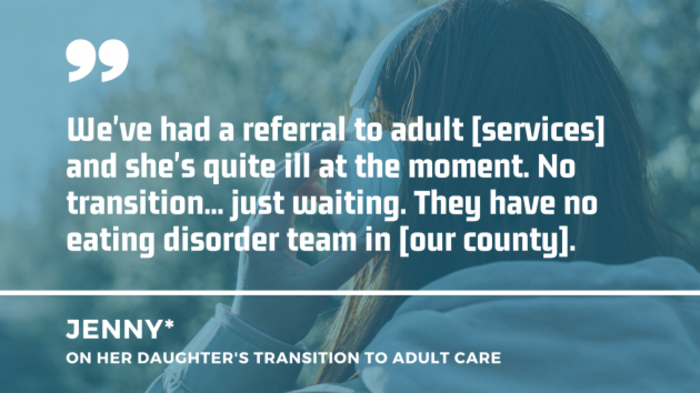 Our SILENT TREATMENT investigation – published this morning – reported that four years on from the launch of the National Clinical Programme for EDs, just three of the 16 specialist community hubs are in place, with only 55% of the staff for three further teams promised for 2021 recruited to date.

None of the promised additional 20 inpatient adult beds are in place, with timeframes for these “to be identified” according to Minister for Mental Health Mary Butler.

Less than one third of available funding has been invested by the HSE since 2016. Diversion of funding to other areas of mental health for a number of years means that the implementation of these hubs and beds is at least two years delayed, according to Harriet Parson of Bodywhys, the Eating Disorders Association of Ireland. This means it will be at least three 2025 before recommended services are in place.

Though children and adolescents are impacted by this, there are more services available for those under 18, with two community hubs in operation and specialist beds in a number of locations. However, adults in just one area – CHO6 which covers Dublin and parts of Wicklow – have access to either outpatient or inpatient specialist care since the one adult community service and three dedicated beds are based in St Vincent’s University Hospital.

For more on how people with eating disorders are being failed by the public health system, read our in-depth investigation here>>

No access to specialist team once in adult care

Another parent, Fiona*, said that her daughter Rachel* was an inpatient when she turned 18, but had to be discharged at that point as she was transferred out of CAMHS.

Since then, she has had no access to any ED specialist team either in hospital or the community, despite continuing to be very sick, Fiona told Noteworthy.

Because of her current health, Rachel is an inpatient for feeding in a general hospital in Dublin at the moment. Fiona is “terrified she will be found dead” and is also worried that she is not being allowed to advocate for her daughter, “even though she is so ill”.

“She wasn’t able to do her Leaving Cert, which was devastating to her… She felt a failure. It had taken away nearly five years of her life. She can’t enjoy going out with friends as she’s too tired.”

Fiona said that a lack of specialist care is having an impact on Rachel, with nursing staff asking recently if “she just doesn’t like food”. Her daughter tried to explain that she wanted it and told staff “it’s her brain that’s broken”. Fiona said: “My heart broke.” Psychiatrist Dr Caroline Maher who is a consultant working in ED services based out of St Vincent’s University Hospital in Dublin said that once the Model of Care is fully operationally, this transition “will become more effective”. She added that this was largely because “the services have been so under-resourced, there hasn’t been the facilities to transfer patients efficiently between services”.

This was echoed by every advocate group and healthcare professional we spoke to about transition of services. They mentioned that this would be particularly the case in future where both services are set up in the same catchment areas.

“The people working in the services recognise that as a major issue,” explained Parsons of Bodywhys. She said she has brought it up with the HSE many times and it is something that people impacted by EDs would raise with the charity regularly.

Maher said she has already been in contact and is working with CAMHS in their area. She said that this is starting to develop and hoped it would become much easier as they “move into the community”.

Changing the age of transition

This was addressed in the latest edition of the national mental health policy – Sharing the Vision – which recommended an increase in the age of transition, said Fiona Coyle, chief executive of the Mental Health Reform. The document states that “the age of transition should be moved from 18 to 25, and future supports should reflect this”.

This involves a ”reconfiguration of services” according to Coyle, who said that a recent working group meeting which some of her team attended was assessing what needs to be done in order to put this in place. She envisaged a pilot would be done initially, training would take a few years and it would most likely be in the “medium term” of three to five years before it was in place.

When asked what she was doing to address this, Minister Butler said that “Sharing the Vision takes a lifecycle approach and seeks to promote positive mental health and build resilience at all ages and stages in people’s lives”.

When asked when the increase in age from 18 to 25 was going to be implemented on the ground, the Minister told Noteworthy that “a Specialist Group on Youth Mental Health Transitions has been established to examine this issue and its work is progressing”.

A spokesperson for the HSE said that “initiatives are underway to improve service provision for young people attending CAMHS and to improve the transition for those that move on to attend adult services”. In regards to a timeline, they added that for Sharing the Vision, “an implementation plan with details around all of the policy recommendations is due to be published later this quarter”.

*Names have been changed to protect children with eating disorders

This is part of our SILENT TREATMENT investigation which was carried out by Maria Delaney of Noteworthy, the investigative journalism platform from The Journal. It was proposed and funded by you, our readers with support from the Noteworthy general fund to cover additional costs.