A BILL THAT would exempt peat extraction for the horticulture industry from the need for planning permission has been slammed by legal experts as incompatible with EU law.

The Horticultural Peat (Temporary Measures) Bill 2021, set to be debated in the Seanad tomorrow, has also been criticised by peatland experts as out of touch with Ireland’s climate ambitions.

The Bill would give a planning derogation for peat extraction for horticultural purposes until 2026 and potentially as far out as 2030. The Bill makes clear that previously unauthorised peat extraction activity does not affect entitlement to this exemption.

Many senators have expressed their concern for the future of the horticultural industry which is facing a shortage of supply this year as stockpiles of peat run out. The mushroom and professional plant growing sectors are most badly impacted.

Most large peat companies stopped harvesting after a landmark High Court ruling in September 2019 struck down regulations introduced earlier that year. The regulations exempted peat harvesting from the need for planning permission and brought all large-scale extraction solely under a new EPA licensing system.

Following the ruling, the system returned to the previous set-up, meaning that large-scale peat extraction needs both planning permission and EPA licensing. 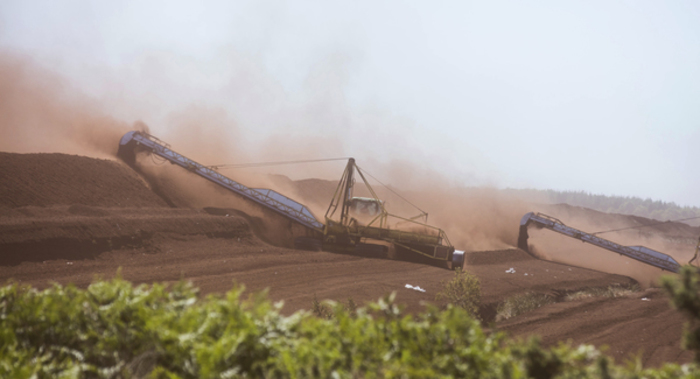 The proposed Bill would again see companies wishing to extract peat for horticulture fall solely under an EPA system. The Bill only allows the EPA to make specific rules to “ensure a high level of environmental protection equivalent to that achievable with individual permits”.

However, the Bill proposes that any pending enforcement action against peat extraction operations would be paused or “stayed” while the derogation is in place.

“As an EU Member State we can’t simply disregard EU environmental law and our duties under the EU Treaties,” she said.

She said the Bill “appears, at face value, to seek to reward unlawful operators and circumvent the environmental protection objectives of key EU Directives and would amount to a breach of Ireland’s duty of sincere cooperation,” a core element of the EU Treaties.

“What is really needed is a concerted approach to managing a just transition for all those caught up by these issues, including our outstanding EU law obligations and the need to manage and restore our peat resources differently to meet our climate change and biodiversity targets,” Uí Bhroin added. 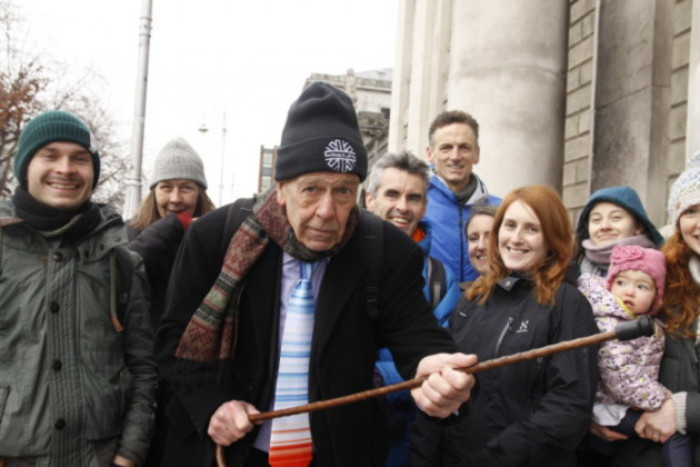 Tony Lowes (c) of Friends of the Irish Environment outside the High Court during the group’s recent challenge of State climate plans.
Source: Niall Sargent/Noteworthy

According to Assistant Professor at the UCD Sutherland School of Law, Dr Andrew Jackson, the Bill is “very clearly inconsistent with EU and international environmental law”.

“This is just the latest example in a worrying trend of environmental litigants being disparaged for exercising their right to access justice,” Dr Jackson said. “The High Court warned about this earlier this year,” he noted.

The quote in the press release from Senator Doherty was referencing the decision of Friends of the Irish Environment (FIE) to challenge the 2019 peat regulations. This led to the landmark 2019 High Court decision to quash the regulations as they were judged to be in breach of EU environmental law.

Tony Lowes from FIE said that the group’s “legal action in 2019 successfully vindicated EU law, so it’s hard to see how it can be described as ‘foolish’.”

Doherty told Noteworthy that she used this language as “the consequences of the action has led to the Irish horticultural growers relying on imported horticultural peat to meet their needs”.

“The result of this action, which could have been foreseen, is leading to increased costs for growers and ultimately higher prices for consumers, putting jobs at risk and having a negative environmental impact given the need to transport horticultural peat across Europe,” she added.

While peat imports have increased, Noteworthy revealed last week that over 500,000 tonnes of peat products have been exported this year, including to the mushroom industry in North America. The annual needs of the Irish horticulture industry is around 90,000 tonnes.

“Do the promoters of the new peat Bill envisage that large-scale peat exports should and will continue from Ireland?” UCD’s Dr Jackson asked. “This should clearly be considered as part of the current debate,” he said.

“If peat wasn’t extracted in Ireland for horticulture, those bogs could in principle be rewetted, resulting in very large annual carbon savings – this needs to be factored in.”

The return to widespread harvesting on any scale would have a negative impact “from a climate point of view”, according to Dr David Wilson, a research scientist specialising in peat. “This is clearly not compatible with any kind of climate action.”

According to Dr Wilson, who has produced work for the Intergovernmental Panel for Climate Change (IPCC) and the International Peatland Society, the Bill is “vague and nebulous”, leaving it “wide open to interpretation” by peat companies as to the level of activity they can carry out.

Several other peatland experts who spoke to Noteworthy were also critical of the Bill, including UCD scientist Dr Florence Renou-Wilson who said continued peat extraction is “not sustainable and environmentally damaging”.

She questioned the legality of the proposal to pause or stay any enforcement action that, she said, would see the State in breach of the EU environmental law.

TCD’s Dr John Connolly, an expert in peatland mapping, said he was “concerned” about the phrasing of “temporary measures”, especially as the horticultural industry has said that switching to peat-free production is still years away.

“What will happen if these horticultural bogs are mined to exhaustion and there is still ‘a lack of proven alternatives’?” Dr Connolly said. “Will more bogs be opened up for exploitation under this Bill?”

“The Greens will not support a Bill that allows widespread extraction of peat without environmental impact assessments which is what this Bill will do,” she said.

Irish growers need our support. @ReginaDo is proposing a new law to end Irish horticulture growers’ reliance on expensive imported peat and allow for the extraction of a small amount of peat in Ireland to meet their needs. pic.twitter.com/5WiDCkB5V6

Launching the Bill last week, Senator Doherty said that she “worked closely” on the Bill with Growing Media Ireland (GMI), which represents most horticultural peat producers, and the Irish Farmers’ Association (IFA).

Both organisations have recently lobbied Ministers and politicians about the need to bring in new legislation to allow harvesting to start up again.

Doherty said that her engagement with the representative bodies on the Bill was in the facilitation in meeting with growers and producers around the country “before I drafted this legislation to rectify the problem”.

A GMI spokesperson said that “as an industry representative group GMI provided assistance” to the senators behind the Bill. The IFA did not respond to our requests for comment.

Fine Gael also released a video last week in which Doherty appeared alongside Ciaran Cuddy of the IFA’s Mushroom Committee. As stated in the video, Mr Cuddy is also the Chief Operating Officer of Harte Peat that identifies itself as “one of the top four mushroom casing suppliers” in the world.

Harte Peat is currently subject to legal proceedings brought by the EPA. The agency claims that the company has been extracting peat without an EPA licence from a site in Co Westmeath for which a licence is required. Harte Peat is challenging the basis of this claim, and is also seeking a judicial review of an EPA decision to refuse to process an application for an EPA licence. Harte Peat applied for a licence in October 2019 while the now quashed regulations exempting the need for planning were still in effect. Both sets of proceedings are due to be heard before the High Court in January 2022.

The EPA told Noteworthy that it “does not wish to comment on proceedings that are currently before the Court”. Harte Peat did not reply to several requests for comment.

Senator Doherty said that she is “aware of many people who are subject to legal cases arising from the collapse” of the previous regulations. This, she said “is all the more reason a solution needs to be found”. GMI said it “is aware that legal proceedings are underway”.

Noteworthy will publish more articles as part of its PEAT SAKE investigation over the coming months as it delves further into the peat extraction industry.