NEW DATA SHOWS the iconic hen harrier remains under threat from forestry and predators in nature zones designated for its protection.

The stark findings in the Hen Harrier Monitoring report for 2021 come as the release of a long overdue State plan to save the species is delayed again until early next year.

The hen harrier, one of Ireland’s rarest breeding raptor species, has seen its population plummet in recent decades.

The last national survey species in 2015 estimated a breeding population of between 108 and 157 pairs – a decrease of 34% since the first survey in the late 1990s.

The species is an umbrella species for the health of biodiversity in the Irish uplands, meaning that, if the hen harrier is in trouble, then at-risk species, such as red grouse, kestrel, meadow pipit, and curlew are likely in trouble too.

The monitoring report was released by the Hen Harrier Project which monitors the numbers of pairs of birds in the six special protection areas (SPAs) for the species during the annual breeding season.  The hen harrier SPA network  – designated in 2007 – are estimated to support almost half of the national hen harrier population.

While there were 62 confirmed breeding pairs this year, the 2021 breeding season was the least productive on record as just 18 pairs were found that have successfully reared and fledged chicks. 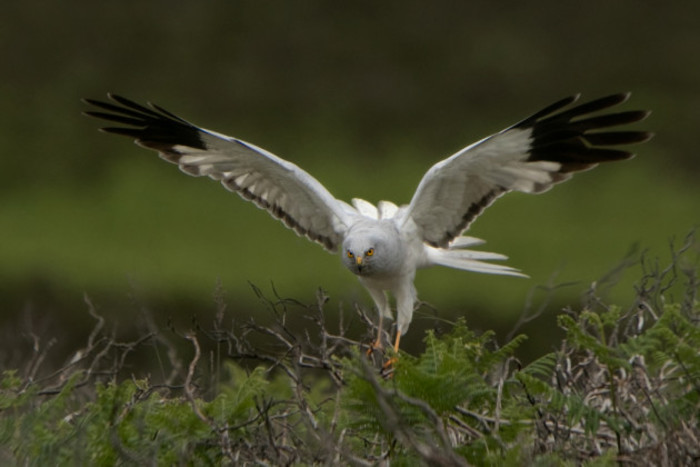 For the species’ population to stabilise or expand, reproduction and survival rates must exceed mortality and dispersal to other areas. The fledging rate in 2021, however, was the “lowest yet recorded”, below levels required for the population to be self-sustaining.

In the Stacks, Mullaghareirks, Mount Eagle and West Limerick Hills SPA that holds the largest population in the SPA network, the population has declined by a third since 2005.

There was an 80% failure rate from the 32 confirmed nests in 2021, with only eight pairs successfully fledging young. Predation was identified as one of the main reasons for nest failure.

In the Slieve Aughty Mountains SPA, predation linked to forestry was identified as a significant factor in the breeding population halving since 2005. “The extent and age profile of the forest plantations in the SPA may be leading to an increased vulnerability to predation,” the report found, together with habitat loss and fragmentation.

It was predicted in 2006 that afforestation and the maturing age of current plantations would drive the loss of open habitat for the species beyond critical levels by 2015.

Despite a high density of breeding pairs in the Slieve Bloom Mountains SPA, all 10 pairs failed to produce chicks this year. This is an “alarming setback,” according to the report.

“Evidence of ground predators in nesting areas strongly indicates that predation is the main reason for high rates of nest failure in the Slieve Blooms. These predators are associated with conifer plantation forestry, which covers 62% of the total land area in this SPA,” the report said.

The State is years behind on its Hen Harrier Threat Response Plan for the conservation of the species led by the NPWS and an interdepartmental group. The plan was set to be completed by mid-2015, however, it is yet to be released.

Two draft versions were released to Noteworthy under Access to Information on the Environment (AIE) Regulations in August 2020 and July 2021 that proposed forestry operations can continue in the SPA network.

This was strongly criticised by raptor experts in light of research that the current level of forestry in the hen harrier SPA network is having a negative impact on the species.

21.09.2021Commission raps Ireland for 'persistently failing' to manage protected nature sites
27.08.2021Loss of Ireland's biodiversity is accelerating - and we're missing the chance to halt it

In late September, the Minister of State overseeing this area Malcolm Noonan said that the process has taken longer than expected “due to the complexity of the issues to be addressed and widespread consultation with stakeholders on these issues”.

“The Consultative Committee raised a number of matters that my Department is now working to address,” he said, including finalisation of conservation objectives for the SPA network.

A key concern identified by raptor and biodiversity experts is the lack of site specific conservation objectives (SSCOs) to protect the species for all six hen harrier SPAs that is delaying the setting of measures to help the species regain a foothold there.

There are clear requirements under the EU environmental law that SSCOs must be set within six years of designation, meaning that the State had until 2013 to set them.

A Noteworthy investigation into biodiversity protection earlier this year found that  SSCOs had only been set for 33 sites in the entire SPA network for protected bird species.

In many of these cases, the conservation objectives were set well after the six-year deadline, taking between 10 and 20 years to set in 18 cases, and over 20 years in 11 cases.

To date, only generic conservation objectives with very little detail are listed on the website of the National Parks and Wildlife Service for each of the six hen harrier SPAs.

According to the Department of Housing – under which the NPWS sits – drafts of the SSCOs have just been completed and circulated to the steering group and the committee overseeing and supporting the development of the threat response plan.

It said that the committee has been asked to return any observations on the draft plan that they received in June 2021. It is the intention to publish the Conservation Objectives once the Committee has returned those comments.

The Steering Group will reconvene in early 2022 to consider the committee’s comments and to decide on any necessary adjustments to the plan before it proceeds to public consultation.