THE PENDING APPROVAL of 36 intensive pig and poultry farms has alarmed environmental and animal rights activists.

This would add millions of animals and compound existing problems with manure, ammonia and animal welfare management.

Almost all of Ireland’s ammonia emissions come from animal agriculture and one of the key sources is manure.

If approved, up to 12 million more chickens and 55,000 more pigs would be industrially reared, producing a potential 53,000 cubic metres (roughly 26,000 tonnes) of excrement annually – the equivalent of 97,000 people – almost the population of Limerick city.

The figures were compiled from public documents submitted by applicants to the EPA. For poultry, animal estimates were calculated by multiplying the proposed increase by the number of flocks reared and slaughtered per year and, for pigs, the average number of piglets born per year.

Data from Cornell University researchers was used to calculate the number of people to produce the equivalent waste.

Of the 36 applications, 26 are for poultry and 10 for pig units. More than half are located in Monaghan and Cavan, counties already struggling with excess manure.

The applications, still open to public objection, are pending approval by the Environmental Protection Agency (EPA). They cover both enlargements of existing pig and poultry houses and new builds that would house over 40,000 poultry, 2,000 pigs or 750 sows.

EPA data shows the agency rejected only a handful of applications over the last 20 years, suggesting all the operations have a good chance of being approved. This year, 17 pig and poultry permits have already been granted.

The detrimental impact that intensive farming can have on animal welfare is well documented with a 2018 EU report finding a range of problems, while a separate study found that cutting piglets’ tails off, a practice forbidden by EU rules, is routine in Ireland.

Activists say that other welfare abuses on some farms include teeth clipping and caging of sows.

Poultry risks include overcrowding in sheds and cages, leg and other bone problems as well as skin damage from ammonia in their litter.

This year, Ireland has also been hit by outbreaks of avian flu which can result in all farmed bird – including those normally reared as free-range – being confined indoors, due to government advice to reduce its transmission.

The message the government is supposed to be giving is reduce our consumption of animal produce, not increase it. How are we going to meet our emissions reductions targets by increasing the number of farmed animals?

“The vast majority of birds are reared indoors,” and “with the rise of avian flu outbreaks”, even free-range birds can be confined inside barns for parts of the year. Rowley also said that many Irish pigs “endure a life of misery”.

It would seem,” she added, “that getting the existing house in order would be a wiser move than permitting even more intensive factories.”

Ireland’s industrial farm sector has expanded rapidly on the back of controversial government plans to turn the island into a global meat and dairy supplier.

In the last five years, numbers of EPA approved intensive pig and poultry permits have grown by 34% to 340 as of December this year. The country is now home to just over 1.6 million pigs, while over 70 million chickens are produced annually, along with four million turkeys and eggs are laid by two million hens.

One of Ireland’s leading climate scientists, John Sweeney – emeritus professor at Maynooth University – described the proposed increase in intensive pig and poultry production as “especially concerning” given that Ireland’s ammonia emissions “have been non-compliant [with EU limits] for seven out of the last nine years”.

One way to better protect human and ecosystem health from excessive ammonia, Sweeney said, was to consider limiting financial farm supports for further intensification. “The continuation of business as usual is not acceptable,” he added.

Ammonia pollution is linked to soil acidification and leaf damage, leading to plant species declines. In freshwater it can kill fish and other marine life because it encourages algae blooms, oxygen depletion and acidification, a process known as eutrophication.

Direct damage to people from ammonia includes eye and lung irritation. Ammonia also helps the formation of tiny particles known as PM2.5 which cause air pollution and respiratory problems.

Existing problems with manure management are another factor weighing against any increase in intensively farmed animals, said Dr Elaine McGoff of An Taisce.

“The EPA gives the license but as soon as the slurry or the litter from the poultry sheds leaves the farm gate, the responsibility passes to the Department of Agriculture,” she said. “To date, there is a significant lack of transparency over where that slurry or litter goes.” 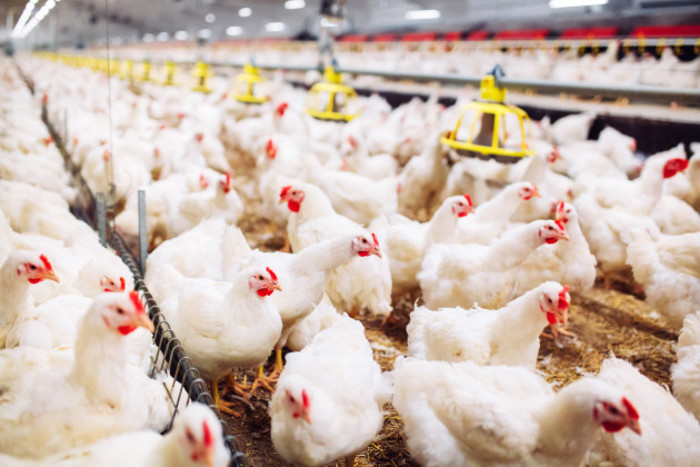 Inside of a shed on a poultry farm
Source: David Tadevosian via Shutterstock

“The war in Ukraine has put huge pressure on grain supplies, driving prices up globally, and we’re now seeing countries in Northern Africa that depend on imported grain for human food no longer able to afford it, further exacerbating the impacts of the drought induced famine.”

Noteworthy asked the Irish Farmers’ Association for a comment on the planned pig and poultry farms as well as associated animal welfare and environmental concerns, but it did not respond to this request in time for publication.

Brendan Guinan, an Irish regenerative farmer with pigs, cattle, chicken and forestry, said the thought of more industrial farms left him indifferent because “no matter what you do, it’s impossible to fight,” he said.

“Ireland could be a genuine green, not green-washed, country with energy and with food.” He argued that the foundations of intensive agriculture are eroding.

“It is built on a house of cards. You can’t farm industrially without antibiotics and creating [antibiotic] resistance, without degrading soil, without cheap oil, without the carbon emitting concrete for buildings, without cheap money. And all those things are stacked against [industrial] farming now.”

09.07.2022The Explainer x Noteworthy: Is Ireland a dumping ground for poultry manure?
07.07.2022'Canary in the coal mine': Protected nature areas under pressure from poultry farming
06.07.2022Suspected false documents and illegal dumping: the murky world of poultry manure

Seven applicants refused in over 25 years

In response to our queries, a spokesperson for the EPA said that since it began licensing intensive farms around 1996, seven applicants had been refused.

They added that some licences issued “may authorise fewer intensive agriculture animal units than originally sought by the applicant in the licence application based on the EPA’s assessment of environmental impacts”.

The agency said that its licensing decisions are made in light of the Department of Agriculture, Food and the Marine’s (DAFM) climate and environmental guidance. These contain a broad range of ammonia cutting measures including reducing protein in feed.

Asked about manure disposal beyond the farm gates, the EPA spokesperson said the agency was “only responsible for the activities within the boundary of the licensed activity”.

They also stated that as part of the licensing process “all applicants must provide information that poultry litter is transported [off the premises]” and that “records, must be maintained of any organic fertiliser sent offsite”. DAFM must be notified of this activity annually, in accordance with regulations of nitrates.

The EPA spokesperson added that, “due to a high volume of intensive agriculture applications/reviews and licences”, it had published new guidance in May 2021 on how applicants close to protected Natura 2000 ecological areas should assess ammonia emissions.

For those applicants near protected sites, and where “background levels [are] already exceeded for the ammonia critical level”, further assessments are required.

They said the new guidance has had “significant implications for the assessment of new and reviewed licence applications within 10km of a number of Natura sites”.

It added that “no new licences have issued and cannot until the overall background levels of ammonia and nitrogen deposition reduce”.

The Department of Agriculture, Food and the Marine did not respond to questions or a request for comment.

By Sophie Kevany and Kunal Solanky for Noteworthy

This story is a joint publication by Noteworthy and Sentient Media. Noteworthy is the crowdfunded community-driven investigative platform from The Journal that supports independent and impactful public interest journalism.