FAMILIES IMPACTED BY the valproate scandal in Ireland are still waiting for a promised inquiry to begin.

It is now over a year since Health Minister Stephen Donnelly committed to holding an inquiry into the historical licencing and use of the anti-epileptic drug sodium valproate (Epilim).

“Department officials are currently engaging with patient groups to develop the terms of reference for the proposed inquiry,” a spokesperson for the Department of Health told Noteworthy.

Karen Keely of the Organisation for Anticonvulsant Syndromes (OACS) Ireland confirmed that they are currently “in discussions with the Department in relation to the inquiry”.

Since Noteworthy published an investigation on the valproate scandal in April, over 40 parliamentary questions have been put to the Minister looking for updates on this inquiry.

The answers to all continue to be almost identical to the response a spokesperson gave us back then – that details of the inquiry “are being considered by officials within the Department of Health”.

It was known since its availability in Ireland in the 1970s that valproate may cause birth defects if used in pregnancy. Yet, for decades many women across the world were prescribed this drug without being warned of the different risks by their doctors.

For years, campaigners here have pleaded with politicians and people in power to investigate this scandal which has left over 3,000 babies in Ireland potentially exposed to this drug and its damaging side effects.

‘Vast majority’ of services not in place

Our investigation also found that the recommended ‘full suite of services’ for affected children is non-existent, resulting in families paying thousands for therapies and other costs.

This was one of the key recommendations of an Oireachtas Joint Committee on Health report over three years ago.

When asked for an update on this, Keely of OACS Ireland said that they are “in regular dialogue with the HSE at local and national level to improve the current pathway and get better services for those affected”, but added: It must not be forgotten that this prescription drug is “known to cause malformations and development delay”, explained the long-time campaigner.

Keely explained that “10% of unborn children exposed to the medication are likely to suffer physical birth defects such as spina bifida and cleft palate, heart problems and limb defects, and 40% will have a developmental delay”.

Noteworthy asked the HSE for an update and timeline on its implementation of this suite of services. A spokesperson said that “the HSE has developed a community pathway”.

They added that patients diagnosed with fetal valproate syndrome (FVS) – a condition that is caused by exposure of the unborn baby to the drug – “have access to health care services”.

In addition, a key measure – the Programme for Women’s Health in Epilepsy – identified by a HSE report to “greatly enhance our ability to reduce harm in the future” has yet to be fully implemented.

This programme is needed in order to fulfil both the European and Irish regulators’ requirements that women taking valproate are required to have yearly follow-ups and be kept up to date with developments of the drug.

In April, a HSE spokesperson told us that there was a “request for additional funding as part of the 2021 estimate process”.

When asked for this article why these nurses are still not in place and if they will be appointed in 2022, a spokesperson for the HSE said that “the request for additional funding was made as part of the National Service Plan 2022″.

In a response to a parliamentary question by Sinn Féin TD Rose Conway-Walsh, the general manager of the HSE wrote that it “has sought funding for the remaining four advanced nurse practitioners as part of the 2022 estimate process.”

The HSE’s letter also stated that “once funding has been received the recruitment of these posts will be expedited”.

A week later, in response to a parliamentary question (PQ) from TD and co-leader of the Social Democrats Róisín Shortall on this topic, Minister Donnelly stated that “the HSE recently submitted a request to the Department for four epilepsy nurse specialist posts”. He continued:

Department officials will consider this request to determine whether funding can be made available in 2022; however, it is also open to the HSE to consider funding these posts from within existing resources.

Noteworthy asked the Department if they were going to grant the HSE’s funding request for these posts, but a spokesperson repeated the response given to the PQ above and did not provide further information.

From working with families impacted by this, Conway-Walsh said that “alongside the need for the establishment of the promised inquiry”, it is equally important “to ensure that no family will be affected by sodium valproate exposure in the future”. She added:

“We know from research done that currently women taking sodium valproate are still dangerously unaware of some of the risks associated with the drug. This is the direct result of key aspects of the Valproate Pregnancy Prevention Programme not being implemented.” 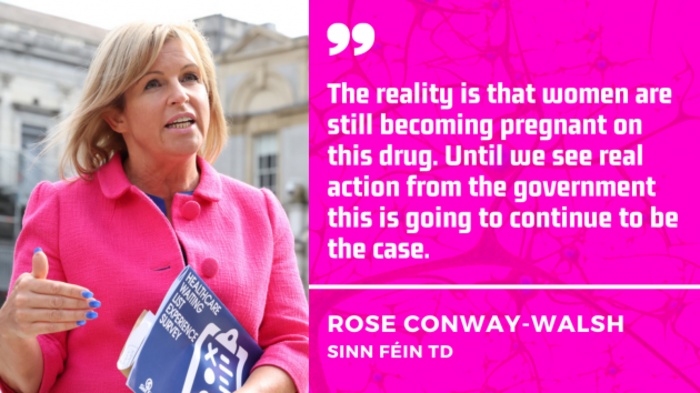 Another important measure was the establishment of a stakeholder group to review and strengthen the current risk reduction measures around sodium valproate use.

Donnelly committed to this group’s establishment and in a letter to the Joint Committee on Health in November, seen by Noteworthy, he stated he had asked his officials “to proceed with establishing such a group before the end of this year”.

However this deadline will not be met. A Department spokesperson told Noteworthy that “the establishment of a stakeholder group is envisaged for Q1 of 2022″.

Conway-Walsh said that this, alongside the recruitment of the four unfilled nurse specialists, are measures that “need to be urgently taken”.

EXOTIC WASTELAND: Where do soft plastics in our recycling bin end up?
Ireland
Soft plastics can now be placed in Irish recycling bins following a change in policy in September 2021. But how much of this actually ends up being recycled on our island?
47 Backers raised €980 of €1180
Learn More
Nearly Funded

SYSTEM OVERLOAD: The public health system was creaking before the pandemic - has Covid-19 broken it?
Ireland
At the start of 2021, Ireland had a backlog of thousands of positive Covid-19 tests awaiting validation.
45 Backers raised €1478 of €1840
Learn More
Open

FUELLING RETIREMENT: Are Irish pensions contributing to the climate crisis?
Ireland
In 2019, Ireland became one of the first countries in the world to divest its investment fund away from companies that make substantial profit from fossil fuels. However, the majority of private Irish pension funds still include companies involved in oil and gas exploration, extraction and refinement.
25 Backers raised €727 of €1240
Learn More
Search for Proposals