Surrogacy offered Annmarie McCarthy the opportunity to become a mother when she was advised not to have children due to a congenital heart defect and also told adoption would not be an option because of the same health condition.

However, almost five years after the birth of twins Olivia and David, she is technically a “legal stranger” to them, McCarthy explained, as in Ireland, the woman who gives birth to a child is legally viewed as their mother.

Her husband David was granted parentage earlier this year – which had been delayed due to Covid. McCarthy is currently applying for guardianship of the twins but this does not give her the same status as parentage and only lasts until they turn 18.

While waiting she cannot sign consent forms for school, which the twins are starting in September, or medical procedures. When granted, issues with inheritance can arise and, according to McCarthy, if a couple split up “you start off on a very uneven keel in a custody battle” as guardianship can be taken away by the court.

Five years as you can imagine – lots of nappies, lots of bottles, lots of sleepless nights, lots of hugs, lots of happiness. All of those things will never change. In the back of your mind, you are mothering these children but you’re not recognised as their mother.

The McCarthys are one of the many Irish families who have travelled abroad in recent years for surrogacy. Most children born to a surrogate commissioned from Ireland are born overseas because Ireland currently has no regulations on surrogacy. 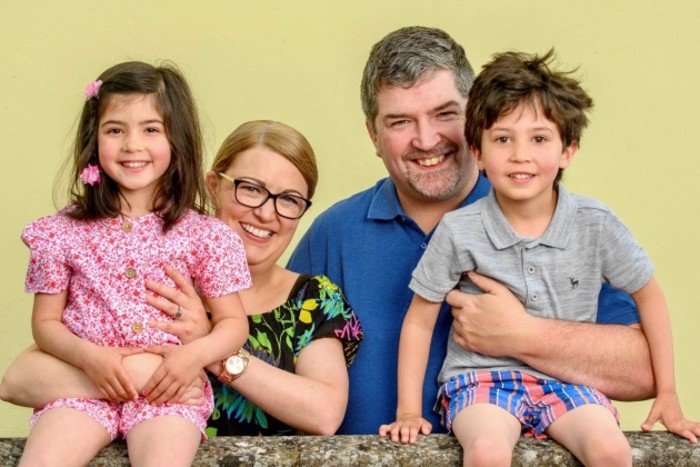 Legislation to address surrogacy has been marked as a priority by both this Government and the last, yet its drafting “is ongoing by officials in the Department of Health, in conjunction with the Office of the Attorney General”, according to a spokesperson.

The Bill on assisted human reproduction (AHR) “encompasses the regulation, for the first time in Ireland, of a wide range of practices, including domestic surrogacy”, the DOH spokesperson added.

From the number of parliamentary questions and debates where surrogacy has been raised in the Oireachtas in recent weeks, it is clear that this lack of regulation is becoming an increasing issue of concern for Irish politicians.

“There had been a hope that it would reach the House before the recess this summer, but I’m not sure that that’s going to be realised,” Senator Mary Seery-Kearney, Seanad Spokesperson on Children for Fine Gael, told Noteworthy. She added that she “certainly” sees it happening in the autumn.

Seery-Kearney spoke recently in the Seanad about her own daughter Scarlett who was born through surrogacy after the senator had gone through numerous attempts at IVF as well as five miscarriages.

“The issue of infertility and how it is overcome is very commonplace and much more regular and normal than people think it is so I think it is necessary for people like me to speak out in that regard.” 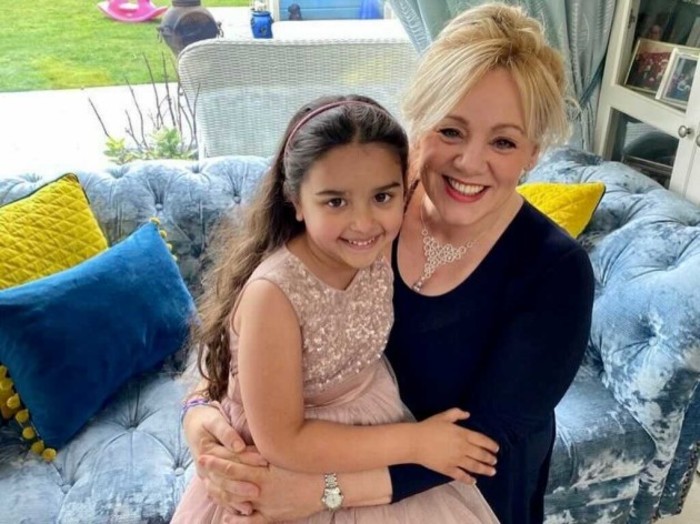 Surrogacy advocates Irish Families Through Surrogacy (IFTS) are concerned that the Bill in its current format does not address international surrogacy or retrospectively recognise the rights of children who have already been born through surrogacy.

A December 2020 report by the Special Rapporteur on Child Protection recommended that “surrogacy legislation should make provision for the recognition of both domestic and international surrogacy arrangements”.

It also recommended that “provision should be made for a pathway to parentage in respect of surrogacy arrangements which occurred before the commencement of the new legislation”.

Sara Byrne told Noteworthy that the advocacy group have met with a number of politicians in recent weeks who have said the Bill may be presented to the Houses of the Oireachtas in its current format, with amendments then added at a later stage.

“Things do get more complicated when you’re bringing in international surrogacy,” she explained, but added that it would be “a massive concern” if it was left out of the Bill and the recommendations of the Special Rapporteur were not followed.

When asked if the Minister was going to implement the recommendations of the Special Rapporteur on Child Protection in full when finalising the Bill, a spokesperson for the DOH said:

“The findings and recommendations of the Special Rapporteur’s report are being considered in the ongoing refinement of the AHR legislation, as appropriate.”

Senator Mary Seery-Kearney told Noteworthy “there’s talk of it being brought through at Committee stage” from her latest discussion with Minister for Health Stephen Donnelly.

This would mean that the Bill could be published as it stands with the international element addressed “when it was at Committee stage”.

But Seery-Kearney said she would prefer it to be included from the beginning as she knows “that lots of people are going to be terribly anxious if it isn’t in the original publication”. Noteworthy asked the Department of Health if the Minister intends to publish the Bill without provisions for international surrogacy arrangements. They provided a statement outlining provisions relating to surrogacy in the Bill, but did not directly answer this query.

We put a similar question to both the Department of Children and Department of Justice who are working with the DOH on this legislation.

Spokespersons for both Departments said the legislation concerns many “areas of law that intersect across the remits of several Government Departments”, including their own, with the Department of Justice adding that the Ministers for Health, Justice and Children as well as the Attorney General “are continuing to work together on these matters”.

The spokesperson for the Department of Children added that the responsibility for the drafting “is a matter for the Minister for Health” and it will continue to engage with other Departments “to ensure that any legislation in the area vindicates the rights and best interests of the child”.

The provisions of the Bill include at least one of the intending parents having to be genetically related to the child and surrogacy being permitted on an altruistic basis. A DOH spokesperson said:

Commercial surrogacy in Ireland will be prohibited as it raises a number of concerns relating to the welfare and commodification of the children involved as well as the potential risks of coercion and exploitation of financially vulnerable women to act as surrogates.

They added that “the draft Bill does not contain provisions to regulate surrogacy arrangements undertaken in other jurisdictions”.

This is one aspect of the Bill that the Attorney General “is considering” at the moment, according to Seery-Kearney. “They don’t necessarily want there to be a contradiction between a domestic law that is altruistic and an international [option] that allows for paid-for arrangements.”

She believes that this “challenge” can be overcome by creating a “green list of countries for whom we recognise their standards of human rights”.

It’s going to have to be done. Otherwise, we will end up with an Irish solution to an Irish problem… so there has to be courage by Government in order to ensure that we do provide for international surrogacy.

‘The last thing we needed’ 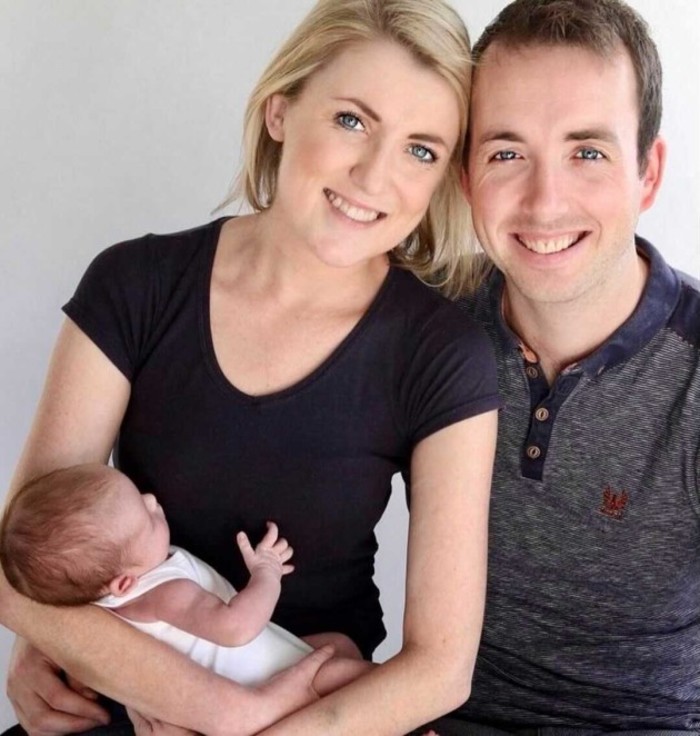 Sara Byrne from Irish Families Through Surrogacy also had a child through surrogacy.

14.07.2020Stateless children and parents who are legal 'strangers': the Irish families left in limbo

Byrne has cystic fibrosis and had a double lung transplant 15 years ago. Because of health concerns, her transplant consultant “strongly advised against” her becoming pregnant. Similar to Annmarie McCarthy, she was also advised that adoption wasn’t an option for her because of her health history and to consider surrogacy.

After what she describes as a difficult “rocky road”, her daughter Alice was born in the Ukraine in 2019.

She was delighted when her first surrogate became pregnant the previous year as they “had been through so much to get to that point” but unfortunately this ended in miscarriage.

I found it really really difficult. I ended up having to see a counsellor which I never had to do through all of the things that happened before.

Having no regulation in Ireland added a number of extra obstacles for Byrne. She had to travel to London on four occasions for egg retrieval which she found “hugely stressful” due to concerns over clinics being unable to export her frozen eggs due to lack of regulation.

In addition to issues with parent rights, she was also not entitled to maternity leave when Alice was born, which was financially difficult after the cost of IVF and surrogacy.

“The last thing that we needed was to be unpaid for an amount of time. If Covid hadn’t happened, I would have had to return to work a lot earlier than I would have liked to, purely for financial reasons.”

Byrne added that “it’s just another aspect to [surrogacy] that isn’t fair”. She said she “would see it as an emergency that this legislation is appropriately enacted”.

“Obviously, I’m upset as Alice’s mother… but it’s for Alice. She’s not being treated equally to every other child in the country. She’s the one that we’re fighting for. She deserves to have two parents in Ireland that are recognised as her parents.” 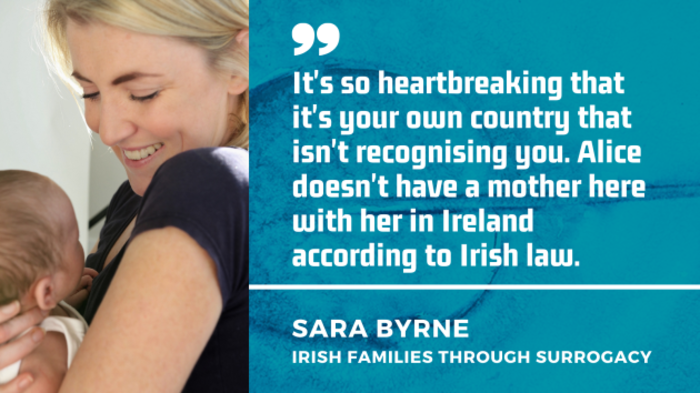 Last week in the Dáil, the Minister for Social Protection, Heather Humphries, stated that “the matter of mothers’ entitlement to maternity leave in the case of surrogacy was a matter for the Department of Children”.

Noteworthy put this to the Department of Children and a spokesperson said that “legislation on maternity leave must be developed in the context of the legal situation concerning parentage, including in relation to surrogacy”.

Any changes in the legal situation with regard to parentage and surrogacy are matters for the Minister for Justice and Minister for Health.

Senator Seery-Kearney has no doubt that “the moment that surrogacy is provided for in legislation, the equivalent of maternity leave will also be provided for”.

When will that be? Noteworthy asked the Department of Health for a timeline, but as per the responses that Minister Stephen Donnelly gave to at least 20 different parliamentary questions he has been asked on the legislation so far this year, the answer was that the drafting of the Bill “is ongoing”.

Last year, Noteworthy conducted an investigation, PARENT RIGHTS, into why there has been so little tangible progress in overhauling Ireland’s laws around surrogacy and egg or sperm donation. Read this article here >>

Noteworthy is the crowdfunded investigative journalism platform from The Journal. This follow-up article on international surrogacy was funded through its general fund.

On a related note, the Noteworthy team also wants to investigate if the delay in publicly funding IVF has destroyed some people’s chance to have children. Our FUNDING FERTILITY project is over 70% funded. Help get it over the line >>