THE FOREST SERVICE has investigated over 75 cases of alleged illegal felling of trees in 2021, with a further 22 cases still open from 2020, newly released documents reveal.

Data released by the Department of Agriculture (DAFM) – under which the Forest Service sits – shows 76 cases were investigated in 2021, with 39 cases still in progress. Tree felling licences are a legal requirement before the felling of any trees.

In 2020, 51 cases of alleged illegal felling were investigated, with around 20 cases still open. Records for these cases were released under Access to Information on the Environment (AIE) Regulations.

Many concern more minor incidents such as removal of trees from an estate in Co Dublin and the felling of some mature beech trees in Co Westmeath.

Some smaller cases are more complex cases, however, where trees are felled in protected nature areas, with the cases falling partly under the jurisdiction of the National Parks and Wildlife Service (NPWS).

There are also several large-scale cases currently open, including the alleged illegal felling of over 30 hectares of trees, discovered by the Forest Service in October 2020. The location information is redacted in the released records.

In an internal email from last October, one inspector told other staff that there was no felling licence in place and that the felling appeared “premature”. Aerial imagery showed that the site was “very clean”, they said, suggesting that “land use change may be underway”.

The Forest Service is also investigating the removal of three hectares of woodland in Co Cavan for which there is no felling licence. The case was brought to the service’s attention by the NPWS in December 2020 after it was contacted by a member of the public “sickened to see the devastation of a large area of mature, broadleaf woodland” while out walking.

The Forest Service then undertook a site visit, finding that the species felled included ash, sycamore, holly and alder. The majority of trees, the inspector found, “would appear to be 10-50 years old with occasional specimens being up to 100 years old”.

The landowner told the inspector their intention was to turn the area into agricultural land, a common issue across many of the open cases from 2020. 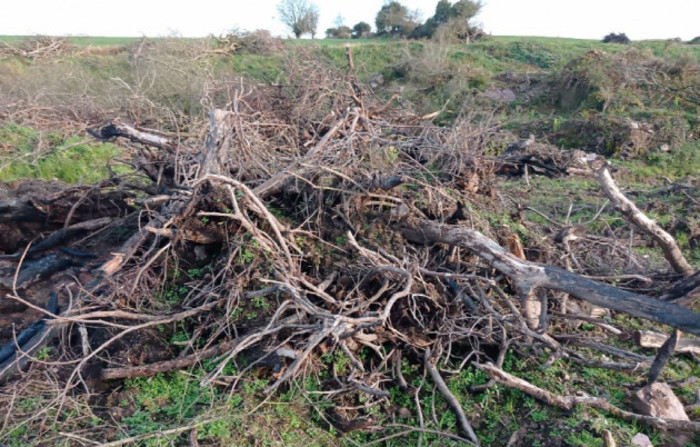 Pile of wood from tree removed without a felling licence in Co Cork in 2020
Source: DAFM/Forest Service

In another case from 2020, the Forest Service investigated the removal of over 110 trees – mainly willow – from a site in Co Cork. During a site visit in October 2020, the landowner told the inspector that he did not know that a felling licence was needed.

The landowner claimed that Department of Agriculture (DAFM) staff had advised him to “clear the scrub” as it was affecting his farm subsidy payments.

During the conversation, the site visit report states, he reiterated the claim that DAFM staff had advised him to “clean the place up” and felt that it was unfair that he was now being investigated by the same Department that had advised him to do so.

In a case in Co Clare, a small section of woodland and almost 1,000m of hedgerow was removed from land bordering agricultural fields, with a large portion of the hedgerow within a protected nature zone.

In a letter to the Forest Service, the landowner said their intention was to reclaim the land to stock cattle and that they immediately stopped work when informed to do so.

Earlier this year, Noteworthy investigated the removal of hedgerows to make way for agricultural expansion, finding that almost 1,000 offences related to hedgerow removal on farms were identified by DAFM between 2011 and 2019.

Three of the open 2020 cases relate to the felling or lack of replanting of forestry on lands previously sold to private individuals by Coillte.

This includes the reclamation of over 40 hectares of land in Co Galway for agricultural use, part of which had been legally felled by Coillte a few years prior to the sale of the land and for which replanting was a requirement in the contract for sale of land.

The conifer plantation was on peat soils, with a Forest Service Inspector visiting the site in October 2020 to find large sections “fully in grassland” and excavators removing peat causing “significant amounts of silt” to flow into the main watercourse leaving the site.

Sale of land by Coillte came under heavy scrutiny earlier this year, with public concerns over the proposed sale of almost 16 hectares of woodland in Co Wicklow leading the commercial semi-state to halt the process.

Coillte yday confirmed to me that they are selling off 39acres of public forest near Enniskerry for a paultry 250,000. This is a scandal. This is a public forest with a right of way, bronze age cooking pits and is part of our natural heritage. This privatisation must be stopped. pic.twitter.com/KgqrolfI0O

The land was advertised for sale in early November, a decision that was derided by People Before Profit TD Richard Boyd Barrett in the Dail. Boyd Barrett subsequently received an email from Coillte stating that the sale would not be going ahead.

“This year we expect to sell [circa] 150 hectares of land but at the same time will purchase [circa] 450 hectares of new lands and forests,” the company said in the email to Boyd Barrett.

Information released to Noteworthy shows that between 2016 and 2020, the forestry agency sold just over 1,200 hectares of land. This includes two large sales in Galway in 2016, with 196 hectares sold in Derrydonnell and a further 101 hectares sold in Killeen.

Most sales were far smaller and the median size of parcels of land sold in 2018, 2019, and 2020 were all below one hectare. Almost 200 hectares related to wind farm projects were sold between 2017 and 2020, including the sale of 43 hectares in Meenbog, Co Donegal.