PEAT EXPORTS FROM Ireland are over 11 times import levels as concerns grow that there is not enough supply for the domestic horticultural sector.

Data released by the Central Statistics Office (CSO) to Noteworthy, the investigative platform from The Journal, shows that exports of peat have far outstripped imports over the past 20 years.

While exports have historically made up the majority of the Irish horticultural peat market, Noteworthy can reveal as part of its PEAT’S SAKE investigation that a working group examining peat use in horticulture was not tasked with examining exports as part of its remit. 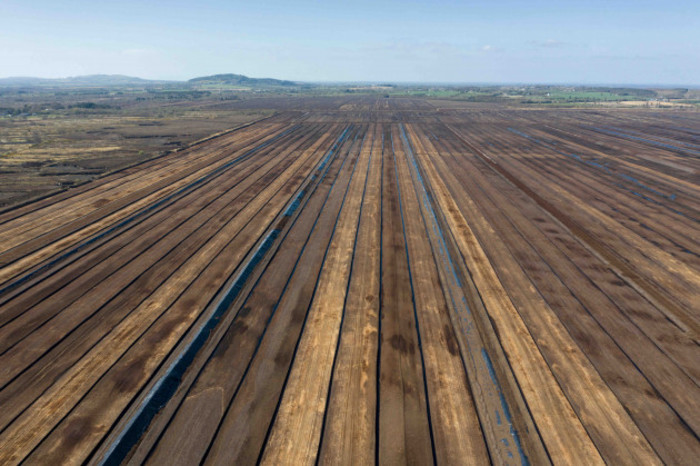 Following a long legal and planning battle since the early 2010s, the 2019 High Court ruling made it clear that companies engaged in large-scale peat extraction need planning permission and EPA licensing, both of which involve a thorough environmental assessment process required under EU law due to the climate and biodiversity impacts of peat extraction.

The majority of peat harvesting for horticultural use has taken place in the Midlands which contains most of Ireland’s unique raised bogs that, today, account for half of Europe’s entire raised bog network.

Nearly all major companies in the sector have neither planning permission or licenses – Bord na Mona is the only company that has EPA licences to date – throwing the industry into disarray.

This issue is acknowledged by the industry itself. In a submission to an Oireachtas Committee in February 2021, Growing Media Ireland, which represents most horticultural peat producers, stated that no company has planning permission for the harvesting of peat and “would be operating outside the law if they continue to do so”.

Following the ruling there have been widespread calls from the industry for emergency legislative changes to allow them to harvest again in 2022 as stocks of already harvested peat have dwindled, leaving the €477 million horticultural industry facing a crisis for supply of growing media.

Bord na Mona supplied nearly all the peat for compost for garden plant growers but in January 2021 announced it had ended all peat harvesting operations on its lands, with reserves expected to have run out by the end of May.

The mushroom industry relies on the use of a thin layer of peat casing on top of high-quality compost to ensure mushrooms grow in a uniform manner. In a submission to the 2020 review of the use of peat in horticulture, Walsh Mushrooms said that the industry is “totally reliant on peat in its current form to be able to operate”.

All eye on imports

This concern culminated in widespread media attention after the recent importation of a large amount of peat from the Baltic region that arrived at Drogheda Port in September.

The peat was destined for Klasmann-Deilmann near the Longford and Westmeath border. The company describes itself as a leading corporate group in the international substrate industry across Europe, Asia and America.

Reporting of the shipment led to a wave of calls from national politicians for emergency legislation to be brought in to allow the industry to recommence harvesting in 2022.

In 2021 to date, 42,800 tonnes of peat valued at €7.3m has been imported into Ireland. The vast majority came in from Northern Ireland, followed by the Netherlands, Great Britain, Germany, Lithuania, Ukraine, and Belarus.

Analysis of CSO data shows that there has been an increased demand for imports, with this year’s imports to date more than twice that imported in 2019 and 2020 combined.

It is also the highest amount imported over the past 20 years, although large amounts were also imported prior to the 2019 High Court ruling, with almost 20,000 and 25,000 tonnes of peat products imported in 2016 and 2017 respectively.

According to Growing Media Ireland, the concern from the industry now is that there is a lack of supply of materials needed for the professional horticultural and mushroom sectors.

The industry group claimed to Noteworthy that the stockpiles that were in place following the High Court decision in late 2019 “have been exhausted and the only viable source of horticultural peat at the moment is imported peat”.

It said: “The imported peat has an obvious environmental impact… compared to harvesting Irish peat, as well as a direct higher cost for Irish horticultural growers, and the 17,000 jobs that depend on the sector.”

However, the importation figures still pale in comparison to the amount of peat products being exported from Ireland, with over 500,000 tonnes worth €94 million leaving the country so far this year – 11.5 times import levels.

In 2020, when the industry was already raising alarm bells about shortfalls in the sector, 919,371 tonnes of peat was exported from Ireland.

This is 10 times what is needed for the domestic horticultural market, according to a briefing note from June 2021 released to Noteworthy that was prepared for the Minister of State at the Department of Agriculture (DAFM) Pippa Hackett.

The commercial horticultural peat sector has always been export focused. According to DAFM, 10% of all peat extracted in Ireland has historically been harvested for horticulture, with 90% of it exported as milled peat or for mushroom casing.

This is confirmed by the industry. In a submission to the 2020 review of peat use in horticulture, Bulrush – one of the largest companies in the sector – said that the industry “exists to supply an export market for substrates”.

Klasmann-Deilmann also said that the industry in Ireland “would effectively not exist without the export market”, with an estimated 95% of its peat exported. “With a few exceptions, revenues in the industry are mostly derived from exports,” it said.

The CSO data analysed by Noteworthy, however, does not differentiate between the different types of peat exported and it is unclear what percentage of exports would be suitable for use in the professional horticultural sector.

For example, a large percentage of exports in 2020 and 2021 went to the UK, the key market for amateur or hobby peat products such as gardening composts that is often not up to the standards required for the professional industry.

In a statement to Noteworthy, Growing Media Ireland said that the total export figure is “greatly exaggerated” as the figures include peat mixed with alternatives.

In addition, it said that domestic stockpiles were still being exhausted until very recently and that the ​​figures for the full year “will be very different as the latter half of the year has seen exports collapse and imports soar”.

However, detailed international trade data for 2020 and 2021 seen by Noteworthy does show that professional grade peat supplies for the mushroom and other professional industries was exported to customers in North America as recently as this month.

In addition, the CSO data shows that there has been significant exports to the Netherlands, South Africa and Israel in 2020 and 2021, with the mushroom industries in these countries known to be destinations for Irish peat products.

The concern over imports has formed the key talking point of a working group of stakeholders set up earlier this year to examine the future use of peat in the horticultural industry.

The group’s report, coordinated by its chair and former chief scientist at Bord Na Mona, Dr Munoo Prasad, is now with the Minister of State Malcolm Noonan and awaiting release.

Noteworthy has seen a version of the final report, the contents of which were widely circulated in the media this week, that calls for peat in horticulture to be phased out by 2035 providing alternative materials become available.

The report also has a strong focus on provisions to allow for harvesting “from existing ‘ecologically destroyed’ bogs” to continue, so long as they have already been prepared for harvesting.

This would require amendments to the current legislation to allow for large-scale extraction that the report said is “absolutely critical for the 2022 season”, recommending new legislation “as a priority” by the end of this year. 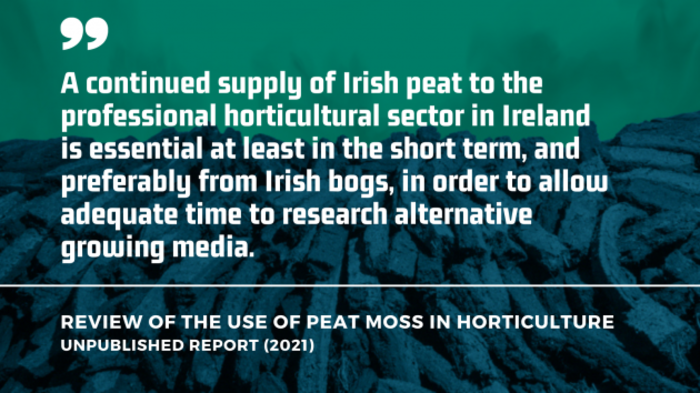 The report also recommends that the importation of peat “should only take place under special circumstances e.g. to make up a shortfall”. The report, however, only makes scant reference to exports, briefly comparing the size of the export trade to the needs in the domestic market.

According to a spokesperson for Friends of the Irish Environment (FIE), which sat on the working group until recently, the level of exports still taking place “undermines the validity of the working group report”.

The group said that its representative was “assured there were no significant exports” taking place. The organisation recently stepped down from the group over the issue.

“[We] could not support the recommendations of the working group who were concerned only with finding ways around the law to continue to extract peat until transition in 2035,” the group claimed.

FIE sent an email to the chair Dr Prasad in October outlining the latest available CSO figures at the time showing large volumes of peat exports between January and July.

In a reply the same day, with Department of Housing officials in copy, Dr Prasad told FIE that “the export of peat from Ireland does not fall in the remit of my Working Group”.

Noteworthy asked Dr Prasad for comment but he said that he was instructed by the Department “not to comment on the report until Minister Noonan has officially approved the report and released the report”.

The Department was also asked to comment on this point and said that, while it would not be commenting on the report until after publication, “the Chair is correct to say that the export of peat did not fall within the group’s remit”.

According to Teagasc, switching to peat-free production will require “significant research and development of a range of alternatives”, with the Department of Agriculture funding a number of projects looking at substitutes and partial peat replacements.

Noteworthy will publish more articles as part of its PEAT SAKE investigation into the peat industry over the coming months as it delves into enforcement concerns and the future use of our precious peatlands as we transition away from harvesting.