THE THIRD WAVE of the pandemic has hit the country harder than could have been imagined, bringing an already stretched health service to breaking point.

Unwelcome records have been broken within the first weeks of the new year, with deaths, cases and numbers in ICU rocketing as frontline staff work around the clock to quell the rising storm.

As staff and resources are again pooled to tackle the latest string of admissions, a host of other services and procedures have been postponed at hospitals across the country.

While attention has been put on elective or non-urgent surgeries or consultant appointments deferred, this month the team at our community-led investigative platform, Noteworthy decided to take a closer look at the impact that Covid-19 is having on services flying under the radar.

We discovered  that, among other areas, the crisis has exacerbated a long-term lack of adequate support in emergency psychiatric care, eating disorder services, and for the roll-out of publicly funded IVF treatment. 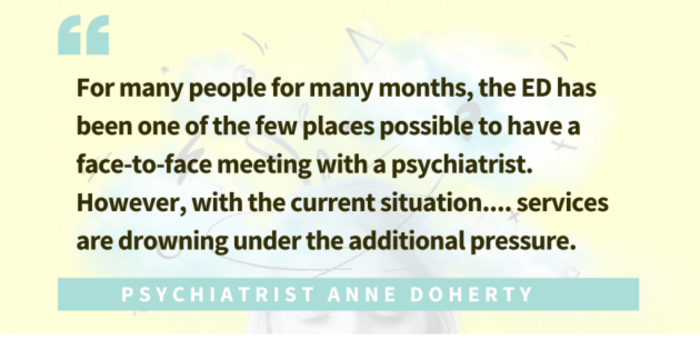 One area that has a need for more support and resources, according to Mater Hospital psychiatrist Anne Doherty, is specialist mental health teams in emergency departments (EDs).

Last month, Dr Doherty explained to us that they are the new frontline in mental health care but are now at a breaking point due to years of underfunding and a lack of hospital beds for psychiatric care.

Services are also underfunded compared to EU colleagues, receiving around 6% of our healthcare budget compared with 10 to 13% in the UK, France, Germany, Sweden and the Netherlands.

The Noteworthy team wants to investigate the measures being taken to tackle a pandemic-induced mental health crisis in Ireland. You can support this project here.

Failed by the health system

A bid to shore up some of the gaps in general mental health funding during the pandemic has, in turn, highlighted serious failings in other areas, including support for people with eating disorders.

As we revealed last month, the entire amount of last year’s development funding for eating disorder services was used to cover other areas of mental health provision.

This is not the first year funding failed to match the State’s promised spend. To date, just €137,000 (3.4%) of €4 million in development funding for eating disorders has been spent since 2018.

This lack of support has taken a toll, with several people with eating disorders, parents and medical professionals all contacting us about their struggles with the current system.

A letter to Noteworthy from one parent summed up the frustration of families trying to get the required medical attention for their loved ones: 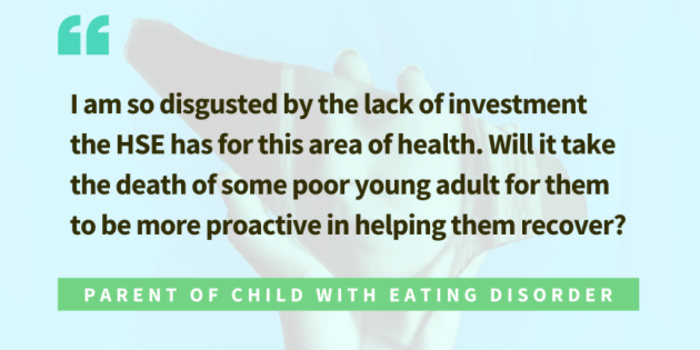 This is just one of the personal stories that we want to highlight in our proposed Silent Treatment investigation to find out if people with eating disorders are being failed by the public health system.  You can find out more details on how you can support this work here.

The frustration of various couples has also been expressed to us in recent months about another long overlooked but vitally important area – infertility treatment.

Almost one in six couples in Ireland face fertility difficulties, leaving many to face thousands in costs for assisted human reproduction treatment, as they wait on public funding to support those undergoing fertility treatment, first announced in 2017.

23.01.2021Opinion: 'All couples should have the right to become parents when faced with infertility'
14.01.2021Extra funding promised for eating disorder services last year was spent elsewhere

This has led many people to travel overseas for cheaper fertility treatment – something that the pandemic has impacted – and as we showed last month, there continue to be long delays in the roll out of a public model.

According to Health Minister Stephen Donnelly, the development of planned regional fertility hubs has “slowed due to the management of the Covid-19 pandemic”. In addition, the Department of Health confirmed to us that it cannot provide a concrete timeline for rollout of publicly-funded IVF. 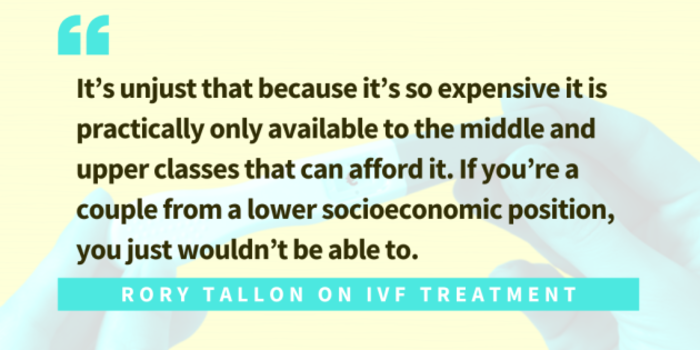 Rory Tallon, who has cystic fibrosis and underwent IVF with his wife Sarah before the birth of each of their two daughters, told us that the cost of treatment was comparable to the cost of a wedding or house deposit.

Emma McDade, who is currently undergoing fertility treatment, wrote an opinion piece for us recently where she called for promised regulation of the sector, citing costly tests and extra ‘add-ons’. She gave an example of a blood test which cost five times more in the clinic compared to her local GP office.

We want to shine a spotlight on this issue and examine if these long delays in publicly funding IVF has destroyed some people’s chance to have children. Here is how you can support this work.

CASH COW: Are subsidies encouraging unsustainable farming practices?
Ireland
The farm has a big role to play in the fight against climate change, yet experts argue that it is difficult to shift to a nature-friendly model while subsidies favour intensive production.
40 Backers raised €857 of €1150
Learn More
Open

TOUGH START: Is the opportunity gap for Traveller children ever going to close?
Ireland
Children in the Irish Traveller community are at a disadvantage from the moment they are born. Infant mortality is over three times higher, suicide is six to seven times higher and life expectancy is over a decade lower than the general population.
50 Backers raised €1530 of €2130
Learn More
Open

SYSTEM OVERLOAD: The public health system was creaking before the pandemic - has Covid-19 broken it?
Ireland
At the start of 2021, Ireland had a backlog of thousands of positive Covid-19 tests awaiting validation.
27 Backers raised €1023 of €1840
Learn More
Search for Proposals