SEPTEMBER WAS A busy month for the team at our community-led investigative platform, Noteworthy, as they worked on several investigations including Selling Our Genes, Cost of Carbon, Shear Force, Spruced Up and Academic Uncertainty.

The team also published a two-part series from the Speak or Survive investigation into the experience of victims of sexual violence in Ireland.

One proposed investigation that we think is particularly important is ‘Revolving Door‘ which we launched for crowdfunding in September.

This proposal emerged after we were contacted by a reader through our website submission form who had lots of questions about the relationship between former politicians turned lobbyists and the Government.

Noteworthy hopes to answer these questions to build a picture of where former taoisigh, ministers and special advisors end up after life in politics and what influence they may still hold in the political sphere.

We launched a number of other proposed investigations recently:

RUNNING ON EMPTY: Is the motor industry putting the brakes on the shift to electric vehicles? Who is lobbying to slow things down?

ENDANGERED SPECIES: Can Ireland halt the decline of its precious biodiversity? Is enough is being done to protect our critically endangered species and habitats?

HOLY LAND: How much money are religious orders pocketing from lucrative property sales over the past number of years?

RED FLAG: Is swimming off Ireland’s coast under threat from pollution? Noteworthy wants to identify places with the worst bathing water and examine the key causes and impact on public health.

Earlier this month, we published a major two-part series focusing on victims of sexual violence.

The first part looks at the roadblocks the current legal and justice process can place in front of a person seeking justice and redress.

The concluding part of the series explores whether victims of sexual trauma receive appropriate supports in the road to recovery.

For this investigation, reporter Peter McGuire made contact with almost 40 victims of sexual crime. Some of these stories did not make it to the final pieces – for legal and other reasons – but ALL of these accounts helped to shape and provide context for the work that was carried out.

Peter also followed several cases through the courts system, seeking insight and insider context from academic, health and legal sources, including a whistleblower within the HSE mental health sector.

Yesterday, we published this opinion piece on our education system by professor Kathleen Lynch in which she argues that a class divide is feeding injustice into our education system. This is linked to the Noteworthy team’s proposal to examine the level of state support available to private schools.

We also recently put out an article on conditions in emergency accommodation to support our proposal to examine how local authorities are dealing with homelessness. The article details complaints raised by homeless people living in state-funded accommodation with Dublin City Council between July 2019 and June this year.

The information, released under the Freedom of Information (FOI) Act, points to alleged unfair treatment by staff, harassment from other residents and infestations as some of the issues people living in homeless emergency accommodation say that they face.

Two more investigations were fully funded in September thanks to your amazing support.

Eyes Right will find out how the far right is influencing Irish public opinion online. For this project, the Noteworthy team will be teaming up with TheJournal.ie to examine the extent of the influence of far-right groupings in Ireland and who exactly is funding their activities.

The other funded proposal is Shear Force that aims to examine the scale of unlawful hedge cutting around the country and how authorities have responded. 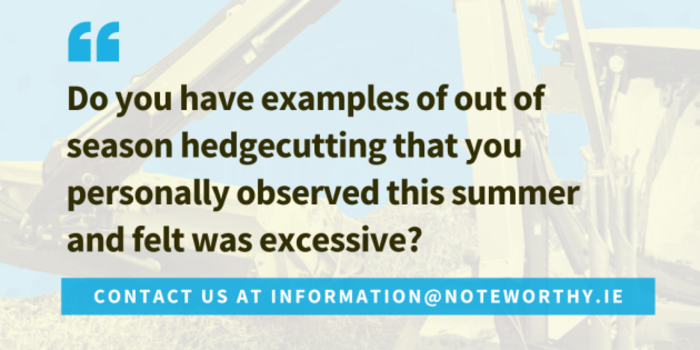 110 – Articles published, funded through proposals or our general fund.

60 – Open proposals compiled from ideas sent to us by the public.

3 – Proposals on their way to being funded soon:

What do you think should be investigated? Noteworthy is a community-driven platform & works by investigating issues that you feel need more attention. What are they? Let us know here.

DEAD END: Will Galway’s long promised ring road make a significant difference to traffic congestion in the city?
Galway
It was 1999 when a bypass was first proposed for the city of Galway. Since then, traffic congestion has grown ever worse and long delays have become a feature of daily life for those who live and work there. For a relatively compact city, congestion is far worse than might be expected, not least because public transport options are so limited.
33 Backers raised €875 of €1200
Learn More
Open

LIFT OUT: When is public transport going to be fully accessible to people with disabilities?
Ireland
Access to public transport has been highlighted as a problem in Ireland for many years with notice needed for commuter trains, numerous bus stops inaccessible, some areas not covered by any service and accessible taxis in short supply.
36 Backers raised €703 of €1200
Learn More
Open

BLIND JUSTICE: Is everyone equal in the eyes of the Irish law and prison system?
Ireland
Around the world, minority groups are overrepresented in prisons. In New Zealand, indigenous Maori people make up 15% of the population but half of the prison population while, in the US, black people are over five times more likely than white people to go to prison.
16 Backers raised €640 of €1890
Learn More
Search for Proposals