NOT ONE OF the children’s disability network teams is fully staffed, according to HSE heads in response to questioning at a Joint Oireachtas Committee this week.

Bernard O’Regan, the HSE’s Head of Operations Disability Services, also stated that the HSE has “an average vacancy rate of about 25% across teams”.

In his opening statement, HSE CEO Paul Reid said that “91 children’s disability network teams are now in place across the country”.

This was disputed by Social Democrats TD Holly Cairns who said: “That is untrue – you’ve partial teams across the country.”

“If Ireland started with 10 players last Saturday in rugby, no one would say they had a team. Children with disabilities at least deserve the same standard. You do not have 91 teams.”

Cairns also asked when families could expect fully operational teams to be in place to which O’Regan said:

“In terms of when it happens, I can’t say the point… other than we are working as hard as we can to build up the levels of staff, to make sure we’re using the resources that we currently have available and in terms of our engagement with Government, to further develop those teams in terms of additional funding over the coming years.”

In response to staffing levels, Reid added that none of the HSE’s community teams “are resourced to the extent we define that they need it at this stage”.

He added that this “goes for our enhanced community care teams, our older persons teams, our disability network teams”. He said that the HSE is “in a process” and “got good funding from Government again this year to support that”.

Some of the children’s disability network teams (CDNTs) are “only staffed to around 50%”, according to professor Malcolm MacLachlan, clinical lead for people with disabilities at the HSE. He added:

“There is very significant clinical risk when people are on waiting lists – one for assessment and then two for interventions. People can miss milestones, they can develop secondary disabilities.”

In relation to the potential implementation of more detailed assessments through the assessment of need process, MacLachlan said that in his estimation “the clinical risk will increase because we will have fewer people available to provide the services and supports that are needed to reduce that clinical risk”. 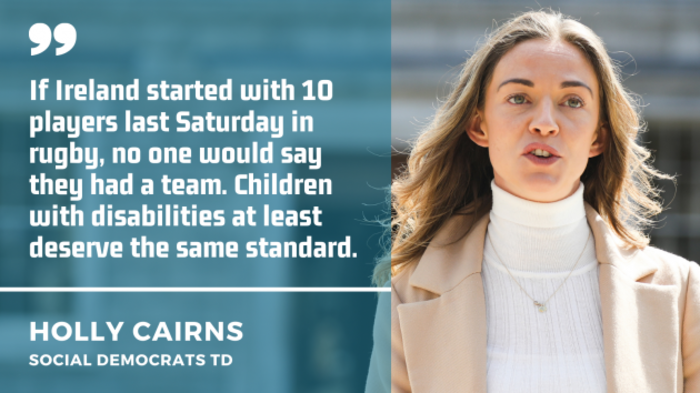 Over 60,000 on community waiting lists

The Joint Committee on Children, Disability, Equality, Integration and Youth was meeting to consider the Ombudsman for Children’s report on this issue as well as waiting lists for children in accessing an assessment of needs.

The ‘Unmet Needs‘ report from October 2020 by Children’s Ombudsman Dr Niall Muldoon highlighted significant and lengthy delays being faced by children and their families in the completion of an assessment of need (AON), despite a legal requirement to begin the AON within three months of receiving an application.

He said that this would be partially done through Government funding that was secured to address waiting lists. Though when pushed on this, he said that he did not have a full breakdown of the amount of this funding which would go to address children with disabilities.

Just over €20m of the €350m 2022 Waiting List Action Plan funding will be directed to community services overall, according to the HSE boss.

Cairns also raised surveys by Inclusion Ireland, As I Am and Down Syndrome Ireland which highlighted the waiting time for disability services. Earlier this month, Noteworthy reported over half of the families of children surveyed by Inclusion Ireland were not in receipt of any service.

“The Down Syndrome Ireland survey confirmed the worrying variations in services across Ireland,” according to Cairns. Over 60% of families who took part in this survey from CHO 4 (Cork / Kerry) reported they received no therapy of any kind last year – the highest of all areas. Carins added:

“Progressing Disability Services is currently a failure. It’s failing children and it’s failing their families. It is breaching their rights and it is not providing therapies where they are most needed and most effective.”

“CHO 4 has been our most challenged area” in terms of the number of assessments sought and backlog, according to Anne O’Connor, the HSE’s Chief Operations Officer.

“In terms of the geographical differences, we are very conscious of that,” added O’Regan, the HSE’s Head of Operations Disability Services. “In deploying the additional resources that are allocated to us this year… we have weighted the allocation of posts to those CHOs and network teams that are further behind in terms of the ratios of supports of staff to children.”

In his opening statement, Reid said that “substantial additional resources have been provided to these teams since 2019″ with “more than 475 posts have been allocated to children’s disability services”. This breaks down as 100 in both 2019 and 2020, 85 last year and 190 planned for 2022.

“It is important to highlight that an assessment of need is not required to access these
services. Any parent, health professional or teacher can refer directly to the CDNT.”

He also said that the HSE undertook a census of the staff on these teams which will allow them “to identify gaps and to develop a comprehensive workforce plan for the area” and added:

11.03.2022Over half of children with disabilities not receiving any services, new survey reveals

“It is important to acknowledge that the supply of qualified health and social care professions does not meet the current level of resources available for new posts; and so we are seeking to address this.”

‘You can see the anger’

Poor communication by the CHO teams was raised a number of times by Fianna Fáil TD Jennifer Murnane O’Connor who said that the HSE were not getting in touch with families.

“You can see the anger here today… The problem is there is no delivery and no accountability.”

Murnane O’Connor said that the HSE teams did not have “proper communication” with parents who needed to know what was happening with services. “The HSE is a disaster for that. I find when you are trying to get things done, it is just a nightmare.” 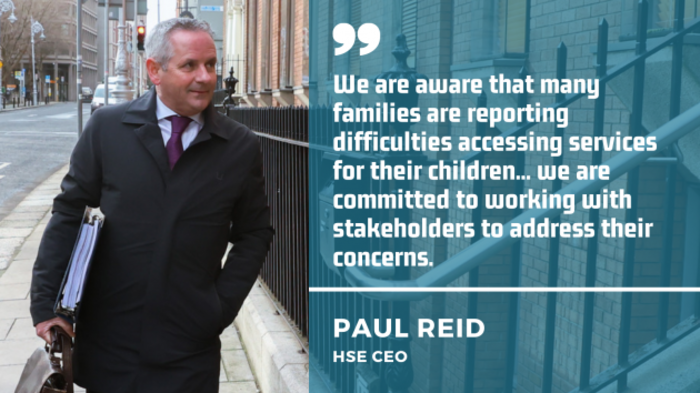 “There is no excuse for our services not responding to families in terms of their needs, other than them being understaffed,” said MacLachlan, clinical lead for people with disabilities HSE. He added that they needed to address responsiveness to families when they have queries.

Children’s Ombudsman Dr Niall Muldoon renewed his call for the recommended actions set out in their ‘Unmet Needs’ report to be advanced.

He also said that it was “something to our shame as a Government” that it has not ratified the optional protocol of the UN Convention on the Rights of Persons with Disabilities (UNCRPD). This would enable disabled people to make individual complaints to the United Nations.

“It just feels like the goal posts keep moving” in relation to this, added Ciara McKenna-Keane from the Office for Ombudsman for Children who said it was part of the Programme for Government to ratify it. She said that “the point here” is that all rights “should be actionable”.

Do you want to find out more about the impact of the rollout of Progressing Disability Services on children and teens?

We want to examine the transition of children to this new model, investigate delays and communication and find out whether adequate resources are being put in place to make it a success.