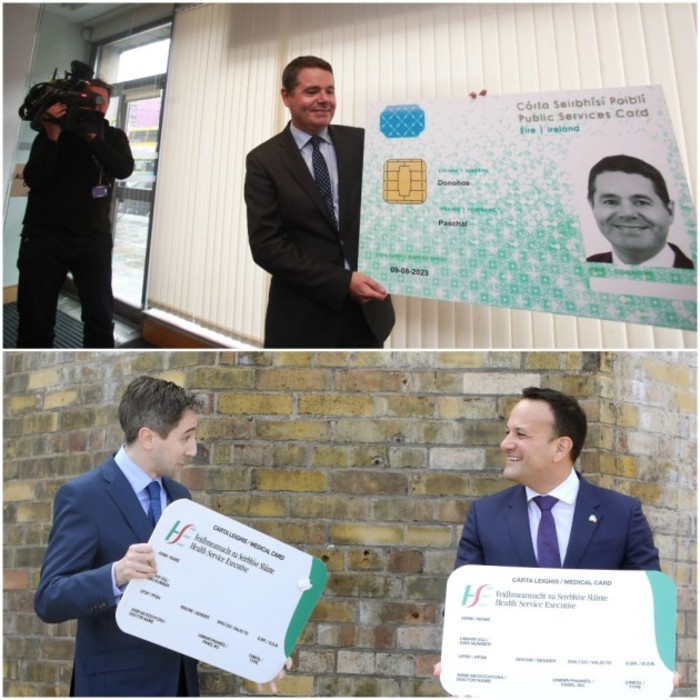 SENIOR CIVIL SERVANTS within government departments were told earlier this year to look at making the PSC a potential replacement for the Medical Card.

This direction in June came at a time when the government will have been aware of the draft report from the Data Protection Commissioner which found that making the PSC mandatory for anything other than welfare was illegal. The findings of this draft were reinforced with the final report completed last month and published this week.

Furthermore, civil servants were also told to prepare a “detailed plan for advancing the PSC as an age card”.

Having a “widespread adoption of the PSC infrastructure” was “critical to the successful delivery of the ‘egovernment’ strategy”, according to a report prepared for senior civil servants last October.

Last month, the Data Protection Commissioner said that its report into the legality of the card had found no lawful basis for the mandatory use of the PSC aside from welfare payments, and also found the State was unlawfully retaining the information of millions of people who applied for the card.

Commissioner Helen Dixon also found that the government hadn’t been sufficiently transparent in terms of the personal data it processes in the context of the PSC.

The government, however, has said it doesn’t agree with the DPC’s findings and won’t be complying with its direction to stop retaining applicants’ personal data.

Taoiseach Leo Varadkar told the Dáil last week that he’s a big supporter of the card while Minister for Social Protection Regina Doherty said that withdrawing it now would be “potentially unlawful”.

At present, the government hasn’t indicated it will be appealing the decision but will likely fight the matter if the DPC takes it to court.

For some time, the government had sought to widen the uses the uses of the PSC - which was initially introduced for social welfare in 2011 – to access other government services.

This included driving licences and passports – but a number of departments, including Transport and Foreign Affairs, have since rolled back on those requirements.

Expanding the PSC is part of the government’s wider plan to migrate access to many of its services online so that, when you need to access a government service, MyGovId is the first port of call.

Through MyGovId you can submit a driving licence application, access your Revenue account or apply for a student grant, amongst other services. However to get onto MyGovId, you must first have a PSC.

A draft of the DPC’s report was given to the government in August last year. Last month, Dixon told TheJournal.ie the findings of that draft were broadly similar to those of the final version of the report. The main finding of this was that making the card mandatory for anything other than welfare has no lawful basis.

However, according to documents released to TheJournal.ie and its investigative platform Noteworthy.ie under the Freedom of Information Act, the government was actively looking at expanding the current uses of the PSC in 2019 despite already being told it didn’t have a lawful basis to do.

In June of this year, a meeting of the most senior civil servants in the country decided to explore the possibility of replacing the Medical Card with the Public Services Card in the future.

This development was included in a paper from the Civil Service Management Board, which is made up of all secretaries general and heads of office in each department.

Included in a section under “primary actions… to be followed up at the next meeting”, it says:

[Department of] Health to investigate the utilisation of MyGovId for medical card applications, and the potential that the PSC could replace the medical card in the future.

According to figures from the Department of Health, there are 1.57 million people in the country with a Medical Card, which provides free GP care and other health services.

To qualify for a medical card, you must provide details of your income, expenses, marital status and dependents. Currently, you don’t need to provide any of this for the PSC.

In the first half of 2019, it was decided that the Department of Justice and the Department of Employment Affairs and Social Protection would work together to “set out a detailed plan for advancing the Public Services Card as an age card”.

This was reiterated in the June meeting. One of the actions that the note from the Civil Service Management Board indicated will be undertaken is for the Department of Employment Affairs and Social Protection to “identify suitable legislation for the PSC to act as an age identifier”. 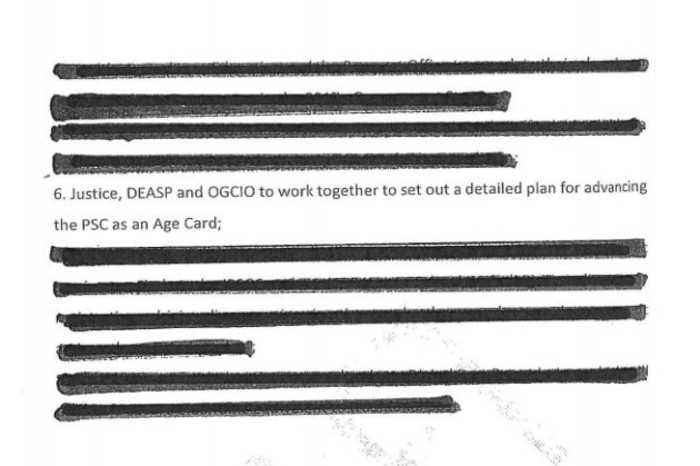 In separate documentation, it’s pointed out that there will be an option to display date of birth on a PSC in the future.

Indeed, draft legislation from the government before the Dáil would mean the PSC could be used as a de-facto age card when purchasing alcohol.

Data Protection Commissioner Helen Dixon told TheJournal.ie last month that while such developments may appear benign, allowing it to be accepted to confirm age by private entities would be a “very, very big step” and something which shouldn’t happen without public debate.

Dixon also highlighted that the expansion of the PSC to a range of services, rather than making accessing public services easier, actually acted as an impediment for people wishing to access those services.

She added that any movement towards making the card mandatory for a host of additional services should be the subject of public debate.

Solicitor and director of Data Compliance Europe director Simon McGarr told TheJournal.ie that the Department of Justice working on the PSC as an age card indicated strongly that it would move towards a card that could be used to satisfy the gardaí as to your identity and age.

05.09.2019Why is the government set for a showdown in court over the findings of the PSC report?
18.08.2019'There's no get out jail free card on this': What next for the Public Services Card?
16.08.2019No legal basis for mandatory Public Services Card to access State services other than welfare, landmark probe finds

“Like the old garda ID card,” he said, adding that the difference here was that it was envisaged for the PSC, which also acts as a compulsory item for a host of other government services.

“Mandatory” but not “compulsory”

Minister Regina Doherty made headlines for the wrong reasons in August 2017 when she told Newstalk Breakfast that the card is is “mandatory” but not “compulsory”.

The government has said that it doesn’t agree with the findings from the DPC and will not cease its programme with the PSC.

The 2018 draft of the report said there was no legal basis for the card to be mandatory for anything other than welfare. The finalised, 2019 version of the report indicated the same.

Within that window between the draft and the finalised report, civil servants were tasked with drawing up plans to expand the use of the card anyway.

McGarr said that looking at making it a requirement for medical cards, especially, was that senior civil servants “do not wish to recognise the limits” within the law of this data gathering, sharing and merging.

He said: “Really the most concerning thing is that the people in charge of the civil service – the stewards of the nation’s data – aren’t aware of what is and isn’t legal in respect of it.

They want to find out about [replacing the medical card with the PSC]. That’s their impulse. They’re revealing they don’t know what the limits of the State are… And this is key to all of the State’s errors in the area [of data protection].

Given the government’s refusal to adhere to the findings of the report, the next step will be for the DPC to issue enforcement action ordering it to comply with the findings, which could end up in a court battle.

In a note to other senior civil servants about the DPC’s findings last month, the secretaries general of both the Department of Public Expenditure and Reform and the Department of Employment Affairs and Social Protection said they were “mindful” of the implications this report had.

“The advice we have received from a legal perspective is to keep comment to a minimum and pending full consideration of the report and the development of an appropriate response,” they said.

In this regard it is to be noted that the DPC findings draw on particular legal interpretations of relevant law that merit careful consideration.

“We remain committed to the project and the important benefits it provides,” they added.

With additional reporting from Ken Foxe and the team at Noteworthy.ie – find out more about their work here.

PARENT RIGHTS: Why are same-sex couples and other parents still in legal limbo with their own children?
Ireland
Half a decade after Ireland’s historic marriage equality vote, many same-sex couples and so-called ‘non-traditional families’ still face discrimination when it comes to their rights as parents.
20 Backers raised €651 of €750
Learn More
Open

ACADEMIC UNCERTAINTY: How are universities and institutes of technology allowed to employ so many researchers and lecturers on precarious contracts?
Ireland
In Ireland, we hold academics in high esteem but are they being treated properly by their employers and the Government?
25 Backers raised €830 of €1300
Learn More
Open

DEAD END: Will Galway’s long promised ring road make a significant difference to traffic congestion in the city?
Galway
It was 1999 when a bypass was first proposed for the city of Galway. Since then, traffic congestion has grown ever worse and long delays have become a feature of daily life for those who live and work there. For a relatively compact city, congestion is far worse than might be expected, not least because public transport options are so limited.
19 Backers raised €555 of €1200
Learn More
Search for Proposals