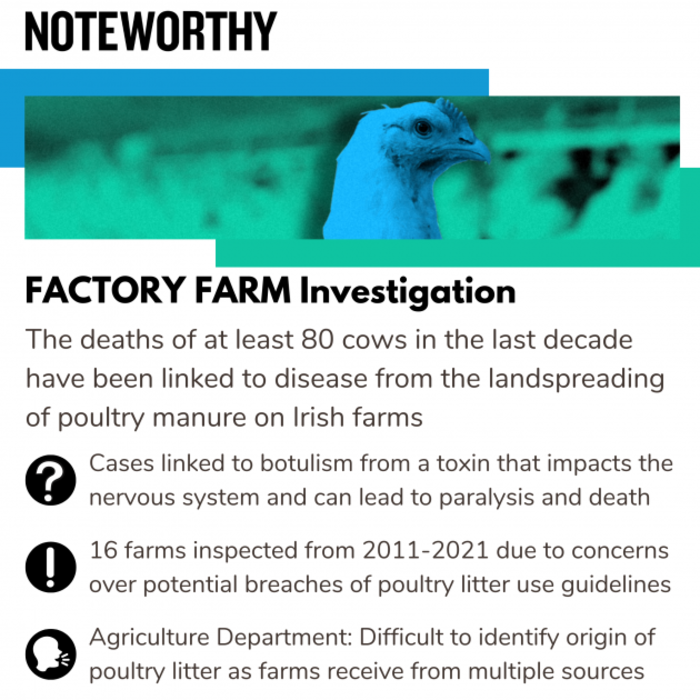 AT LEAST 80 cattle have died from botulism linked to the landspreading of poultry litter as a natural fertiliser on nearby farms, records released to Noteworthy reveal.

As part of our FACTORY FARM investigation in collaboration with The Detail and The Guardian into the poultry industry on the island of Ireland, we analysed the potential disease impact from poultry litter as the industry continues to expand.

Poultry manure is rich in nitrogen, phosphorus, & potassium and can act as a powerful fertiliser, used for compost in the mushroom industry and landspreading on tillage and vegetable farms to encourage crop growth.

However, there is a downside to the production of such quantities of litter that, if poorly managed, can cause environmental impacts and human health risks, such as water, air and soil pollution, spread of antimicrobial residues and pathogens such as botulism.

Botulism is caused by a bacteria which produces a toxin that, if eaten or breathed, impacts the nervous system and can lead to paralysis and death. It is known to be fatal within hours when ingested by an animal.

Poultry litter can contain decaying organic material, including the bodies or parts of deceased chicken, that can produce these toxins then ingested by cattle or inhaled while breathing.

There are strict guidelines in place for the handling and use of poultry litter to ensure that it is spread without delay and, where it is being stored for a short time prior to landspreading, strict control measures are required. This is not always the case in practice, however. 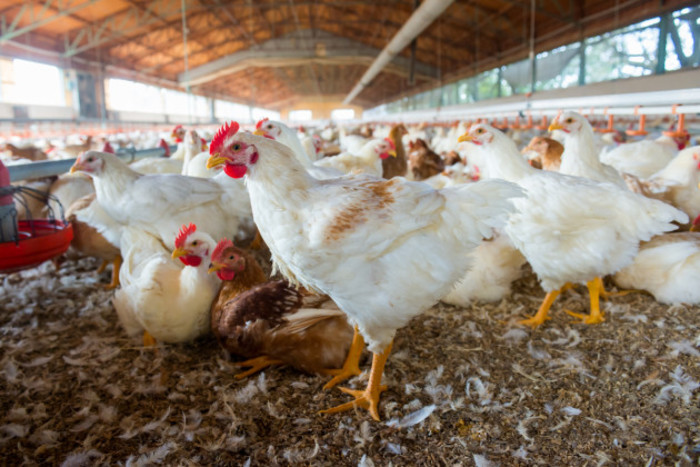 Poultry inside a shed
Source: Photoarte/Shutterstock

According to data released to our team by the Department of Agriculture (DAFM), 16 farms were inspected between 2011 and 2021 due to concerns over potential breaches of the codes of good practice for poultry litter.

Breaches were identified during seven of the inspections, including one case as recently as 2021. A total of 80 cows died or were euthanised in the cases, 61 of which were dairy cows.

Botulism linked to the landspreading of poultry litter on nearby farms was identified as the cause in each case. In one case, three cattle were euthanised or died on a farm where there were also poultry present and the litter came from the farm itself.

In another case from 2019 in Cork, litter was removed from poultry houses and piled in the tillage field about 500 metres from the grazing ground. In the most impactful case identified in the DAFM records, 19 dairy cows died across two farms in Cork in 2010.

In a more recent case from 2018 in Wexford, 12 dairy cows died, while 10 dairy cows died from a case in Louth in 2020. The litter came from a farm in Monaghan. An inspection was carried out at the poultry facility but no non-compliances were uncovered.

“Some 30 poultry farms are visited each year on a random basis for specific animal by-product controls,” the Department said. There are currently around 350 poultry farms in Ireland. 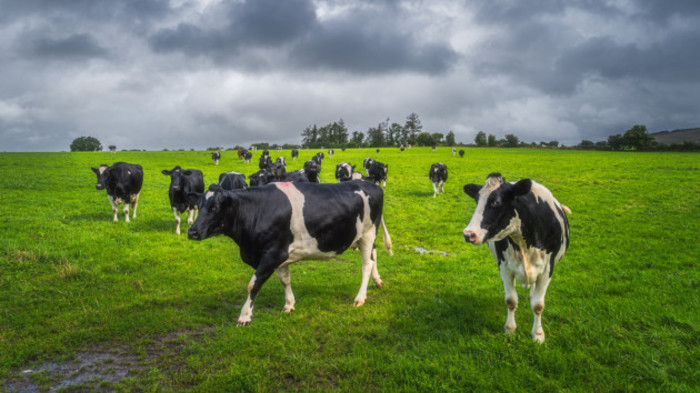 Origin of the litter

The origin of the poultry litter was only confirmed in one other case, coming from a poultry farm in Mayo that has the heaviest concentration of farms outside of the border region and Limerick.

07.07.2022'Canary in the coal mine': Protected nature areas under pressure from poultry farming
06.07.2022'Potential fraud' in poultry farm planning applications investigated in the North
06.07.2022Suspected false documents and illegal dumping: the murky world of poultry manure

In a statement, the Department said that it can be difficult to identify the farm of origin as tillage farmers typically receive litter from multiple sources, with deliveries often directly to fields.

This is seen in a botulism case from 2018 in which seven dairy cows died in Kilkenny after poultry litter was spread on a neighbouring farm. The inspection report stated the farm where the litter originated from should be inspected “to establish if proper procedures are being adhered to”.

When asked if this inspection took place, DAFM told Noteworthy that, as there were a number of litter deliveries from several poultry farms, “the definitive farm of origin could not be identified”.

In part one of this investigation, we revealed that there are serious concerns over the regulation of the poultry litter trade on the island of Ireland.

Records released to our investigative team reveal major concerns from local authorities with the highest concentrations of poultry farms that there is poor monitoring and enforcement to verify where poultry litter is going and how it is being spread.

This investigation was written by Niall Sargent of Noteworthy. It was proposed and co-funded by you, our readers. This article was developed with the support of Journalismfund.eu as part of a cross-border project with Rory Winters, Luke Butterly and Tommy Greene for The Detail and Ella McSweeney for The Guardian.

We also have a number of farming, climate and biodiversity-themed investigation proposals which you can view here.