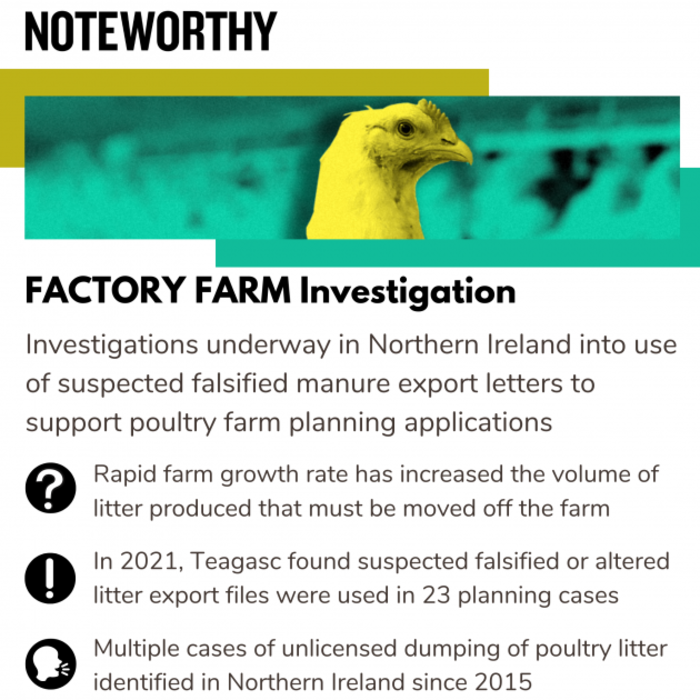 AN INVESTIGATION IS ongoing into the suspected use of “falsified” records in some planning applications for poultry farms in Northern Ireland, Noteworthy can reveal.

As part of its FACTORY FARM investigation with The Detail and The Guardian, Noteworthy took a deep dive into the all-island poultry litter trade and serious concerns raised over the regulation of the industry on both sides of the border.

The rapid growth in farms and bird numbers in recent years has created a problem – the sheer volume of poultry litter produced and the ammonia emissions that come with it that are already at extremely high levels across the island.

Due to concerns over the scale of the ammonia problem in Northern Ireland, anyone wishing to expand their poultry farm must provide evidence that the litter will be safely disposed, with tillage farms in the Republic of Ireland a key outlet.

Poultry litter contracts with farms in the South were included with over 80 planning applications across a range of local authorities in the North since 2015.

There must also be confirmation from a State body that the importer is a bona fide farmer with the capacity to take the litter. Our analysis of Northern Irish planning files show these official letters are mainly provided by the agri-research body Teagasc.

These Teagasc letters and litter contacts are vital files, without which the farms face the risk of being refused planning permission as the industry continues to expand and searches for an outlet for the sheer volume of litter produced.

Records released to our team, however, reveal that a Teagasc investigation in early 2021 found suspected “falsified” or “altered” Teagasc letters were used to support 23 applications for poultry farms in Northern Ireland since 2015. 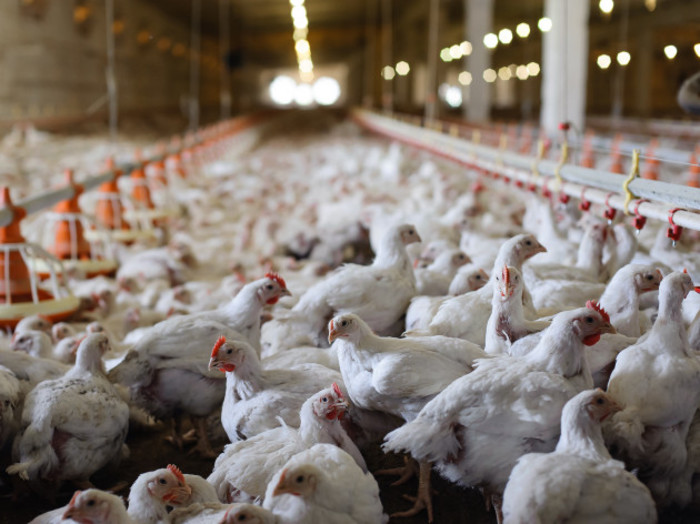 Inside of shed on a poultry farm
Source: Sergey Bogdanov/Shutterstock

A March 2021 report released to our team states that, through an internal investigation, Teagasc found 60% of 38 letters examined that were claimed to be from the agency were suspected to be either “falsified” (15) or “amended” (8), with only 15 verified as being “legitimate”.

Described as “a matter of significant concern”, the Teagasc report stated it was “clear” that “there exists a significant level of falsification and alteration without consent of documents in support of NI [Northern Irish] planning applications”.

An Garda Síochána was notified, as was the Department of Agriculture (DAERA) in the North. DAERA alerted the Department for Infrastructure (DFI) that investigated the matter, following which it “wrote to the relevant councils advising them to consider the impact of potential false Teagasc information in respect of planning decisions granted”.

At the request of DAERA, officials from the Department of Finance also liaised with the Police Service of Northern Ireland (PSNI) on an investigation into “potential fraud”.

This element of the investigation also examined the awarding of grants to sites identified by Teagasc, with DAERA determining there are no concerns regarding the awarding of funding. Since 2014, it has provided £6m (€7m) in grants towards expansion of poultry farms.

In addition, the Northern Ireland Environment Agency (NIEA) carried out its own investigation and raised “specific concerns” with two councils regarding alleged breaches of planning conditions at four sites.

NIEA has initiated action against the operators of three of the sites in relation to the failure to submit manure export records that may result in a reduction to subsidy payments.

Two councils in the North confirmed that they have opened enforcement cases, while other local authorities said that investigative actions are underway on the issue.

In a statement, the Ulster Farmers’ Union said that it “was not aware” of poultry farms using suspected falsified documents until approached by our project partners, The Detail.

08.07.2022Deaths of at least 80 cows in last decade linked to spreading of poultry manure
07.07.2022'Canary in the coal mine': Protected nature areas under pressure from poultry farming
06.07.2022Suspected false documents and illegal dumping: the murky world of poultry manure

“This is completely unacceptable and only harms the reputation of Northern Ireland agriculture and must be fully investigated and dealt with by the appropriate authorities,” it said.

Records released by DAERA show that it discovered 11 cases of dumping or unauthorised storage of poultry litter on farmland since 2015 in the North. In two of the cases, the breach was found to be intentional, with off-farm effects identified in four cases.

There is nothing to suggest that any of these incidents are linked to the cases identified by Teagasc or those currently subject to investigation by authorities in the North.

Our colleagues on the investigation team at The Detail also published an article today which delves more deeply into issues in Northern Ireland which you can read now.

Our other project partners The Guardian also published an article examining concerns from environmental campaigners that the Republic of Ireland is becoming a “toilet” for cross-border pollution. You can read the article here.

This investigation was written by Niall Sargent of Noteworthy. It was proposed and co-funded by you, our readers. This article was developed with the support of Journalismfund.eu as part of a cross-border project with Rory Winters, Luke Butterly and Tommy Greene for The Detail and Ella McSweeney for The Guardian.

We also have a number of farming, climate and biodiversity-themed investigation proposals which you can view here.