DISABILITY ORGANISATIONS ARE calling on the urgent implementation of interim measures to address the lack of services being provided to children with disabilities following the stark findings of two recent surveys.

Over 50% of the families of children surveyed by Inclusion Ireland were not in receipt of any service. Another survey by Down Syndrome Ireland backs this finding with almost half of their respondents reporting no therapy of any kind in the last year.

Many parents reported that their child spent a significant time on a waiting list for services. 85% of the Inclusion Ireland respondents said that they have waited or continue to wait for more than a year, with some waiting more than six years.

Both surveys highlight loss of services as well as a lack of clarity and communication in relation to plans and timeframes for the controversial Progressing Disability Services programme which is changing the way services are provided to children.

Over 1,000 families responded to Inclusion Ireland and almost 30% of Down Syndrome Ireland’s members – over 400 families – took part in their survey. “The high level of response… is indicative of the deep concern that many families feel and needed to express,” said Derval McDonagh CEO of Inclusion Ireland.

Impact of no therapy

One family member with concerns is Aoife Daly whose daughter Croía has not had any therapy over the past year. Up until then Croía had been receiving physiotherapy but this was stopped after she was advised of a move of services due to the new programme.

“When I was speaking to someone from the new services, they told me that they were still seeing severe cases. It made no sense whatsoever. How can they tell me about my daughter when they’ve never met her?”

Daly beamed when she spoke of her two-year-old’s love of music and dancing, as well as her strong minded fashion sense – being determined to pick out her own clothes. However, the upset in her voice was evident when she mentioned the frustration Croía has when communicating with her and children in her playschool.

“When there’s other kids around and they’re all chatting away, you can see that she’s looking at them and she’s trying so hard to try and interact.”

After “ringing and ringing”, Croía has an appointment with a speech and language therapist for the first time next week, but Daly said that she doesn’t know if she would have got that appointment without “nearly crying” on the phone to the new services. 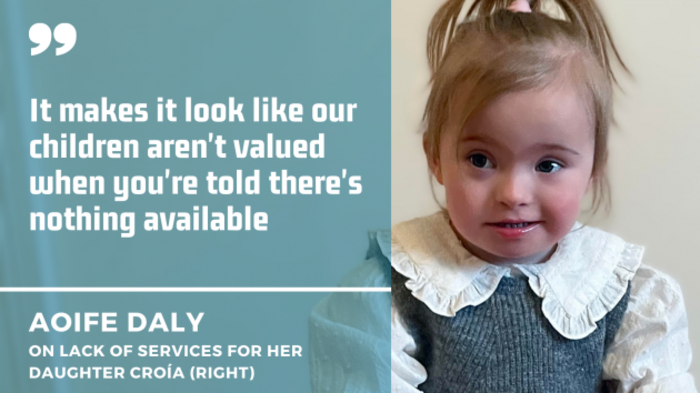 The system is failing children, according to Barry Sheridan, CEO of Down Syndrome Ireland, who said: “Across the board, we’re seeing a really poor implementation of Progressing Disabilities in terms of meeting the needs of people with Down syndrome.”

He added that the survey results were “very disappointing” and “we need to be doing better” as a country.

While the Progressing Disabilities model could improve over the coming years, we don’t have years. We have children now who haven’t had any access to any therapy and we’re concerned about those children and their opportunity to live their life to their full potential.

Sheridan said that they are seeking the implementation of interim solutions for those who aren’t able to access services. Over 70% of respondents to the Down Syndrome Ireland survey would like financial support to allow them to source therapy themselves, with Inclusion Ireland reporting parents being “under extreme financial strain to source private therapies”.

Inclusion Ireland’s survey report also states that “early intervention is well researched and documented in terms of a child’s development and their later access to their right to education” and the importance of this was emphasised by all Noteworthy spoke to.

Provision of early intervention and services designed to minimise and prevent further disabilities are part of the UN Convention on the Rights of Persons with Disabilities (UNCRPD) which is being violated by Ireland, according to Sheridan. “This isn’t happening and the Irish Government signed up to this.”

When Noteworthy asked for a response to Ireland’s compliance with the UNCRPD, a HSE spokesperson did not directly comment on this. However, they said that the Progressing Disability Services programme “supports the reconfiguration of children’s disability services to provide equitable, child and family centred services based on need rather than diagnosis” and that “this aligns with” the UNCRPD.

The same query was directed to a Department of Health spokesperson who said that the “approach to the UNCRPD since ratification of the main convention has been one of progressive realisation where we make progress towards full implementation step-by-step and year-on-year”.

They added that both Minister for Children and Disabilities, Roderic O’Gorman, and Minister of State for Disabilities, Anne Rabbitte, “have indicated that each is open to an early ratification of the optional protocol, if possible”. If ratified, this would enable disabled people to make individual complaints to the United Nations.

Change process ‘has been challenging’

Noteworthy also put the results of the Down Syndrome Ireland survey to the HSE and asked what it is doing to address parents’ concerns about the Progressing Disabilities model with many reporting a worsening situation for their children.

A spokesperson for the HSE said that it “welcomes the publication” of the survey report which “provides valuable insight into the experience of parents accessing services for children with disabilities”.

The spokesperson continued: “There are 91 Children’s Disability Network Teams (CDNTs) across the country. These teams ensure that children with complex needs can access child and family centred supports based on their need rather than their diagnosis.

This is a new model of service to provide fair and equal access for all children, regardless of where they live or where they go to school. The majority of CDNTs were established in 2021 and the HSE acknowledges that the change process has been challenging in some areas.

Minister Rabbitte “acknowledges and accepts that the implementation and roll out of CDNTs has proved challenging and services have not reached the desired level as yet”, according to a Department of Health spokesperson, who added:

“There have been recruitment and retention challenges regarding the filling of therapy posts due to workforce availability and the significant availability of employment opportunities across the wider health sector. Regrettably, this has caused delays in children accessing therapy supports.”

The DOH spokesperson said that the “Minister has been keen to provide for the expansion of the CDNTs to service children’s needs and has maintained support for additional posts in recent years”.

Phase one of the “reconfiguration of children’s disability services” is now complete, according to the HSE spokesperson. They said that 375 posts have been allocated to support CDNTs in 2021/2022, with recruitment to these posts on-going. They added:

“Services are moving from being professionally centred, or expert led, to being family centred… The family brings knowledge of their child and the team brings their expertise.”

Updated on 11 March to include Department of Health response

Do you want to find out more about the impact of the rollout of Progressing Disability Services on children and teens?

We want to examine the transition of children to this new model, investigate delays and communication and find out whether adequate resources are being put in place to make it a success.