IRELAND FACES SIGNIFICANT, urgent and complex climate and environmental problems and the law and access to it are a necessary part of the solution.

We are in a climate and biodiversity emergency. Never has it been more important to ensure that government, the construction industry, corporate bodies and others are held to account in relation to breaches of environmental and climate obligations.

This might include challenging a development, through the planning system, because it is likely to generate significant emissions or adversely affect the environment through pollution or habitat destruction.

Or because it is in contravention of the local development plan, which is essentially an environmental contract between the planning authority and the wider community, regulating private development in a manner consistent with the objectives stated in the plan.

Often, because of where they live, low-income, vulnerable and marginalised people, are particularly exposed to poor planning decisions, including under-provision of public transport or active travel networks, poor air quality, lack of access to green space, flood risk and proximity to industrial estates or dumps.

In the midst of a climate crisis, members of the public and NGOs should be empowered to fight for clean, healthy and liveable communities. Access to justice should be strengthened and promoted.

The Attorney General is currently leading a review and overhaul of the planning legislation and, in parallel with this review, work is underway to establish a new division of the High Court to deal with planning and environmental issues, plans for which were signed off by the Cabinet last week.

We do not yet know what changes will be proposed. Hopefully, many of the reforms will help simplify and streamline the complex planning system.

However, the entire process has been overshadowed by a troubling narrative driven by members of Government and the construction lobby.

One that blames a growing ‘industry’ of judicial reviews for the delays in the building of much needed housing. A narrative that pits environmental protection, process, proper oversight and accountability against progress on housing and other infrastructure. 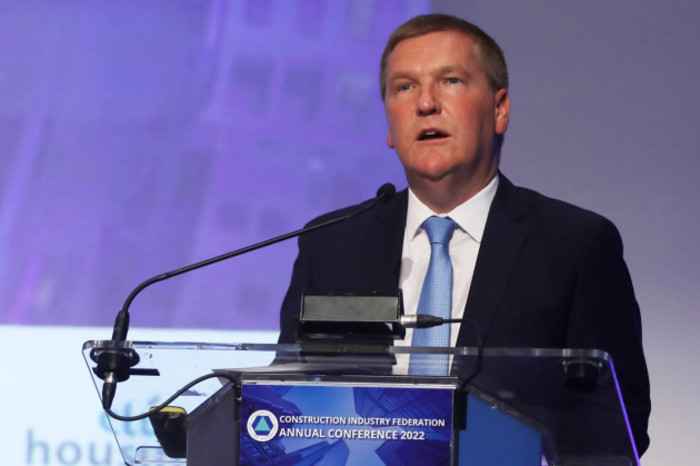 Last month, in an address to the annual conference of the Construction Industry Federation, the Minister for Public Expenditure and Reform, Michael McGrath TD, described the planning system as:

One of the main delays in housing project. The system is far too complex and unwieldly and far too many projects end up in a Judicial Review.

On the same day, while visiting Limerick, the Minister for Housing Darragh O’Brien TD was reported as saying:

We have a housing crisis that is resolvable and solvable, we need people to stop objecting, frankly.

Given the disproportionate focus on judicial review by Fine Gael, Fianna Fáil and the construction lobby, we expect that restrictions on access to the law and litigation will be prioritised in the new planning and development legislation.

Such a move would seriously undermine the environmental rights that members of the public and NGOs are entitled to under the Aarhus Convention – ratified by Ireland in 2012, including the right to challenge, through judicial review if necessary, decisions that affect the environment.

This right was reinforced in a Supreme Court ruling just earlier this week, in which Mr Justice Brian Murray cited the Aarhus Convention when ruling that anyone who challenges a planning permission on environmental grounds is entitled to a protective costs order for all of their grounds of challenge.

This means save for abuse of process, they will not have to pay for the costs of proceedings if they fail in their claim.

Changes to law at the 11th hour

There is reason to be concerned – the recently shelved Housing and Planning and Development Bill, introduced by the Government in 2019, sought to reduce costs protections and increase restrictions around who has standing to take legal cases.

This  would have made it very difficult for members of the public to bring judicial review proceedings in relation to planning decisions that affect the environment. It also proposed imposing additional requirements on NGOs in terms of member numbers and length of time in existence.

In July of this year, during a debate on the Planning and Development (Amendment) (No. 2) Bill, changes to the judicial review process were put forward at the 11th hour including a proposal, ultimately withdrawn after backlash, that would have allowed An Bord Pleanála to frustrate judicial review proceedings against aspects of its decisions by simply changing those aspects mid-proceedings.

A judicial review application will only be successful if there has been a breach of law or process.

Yes, there has been in increase in the number of judicial reviews related to planning – 95 in 2021, compared to 17 in 2012 – but a significant proportion of these related to the widely criticised Strategic Housing Development (SHD) scheme, the objective of which was to fast-track housing developments by bypassing local authorities, so that the only mechanism to appeal a decision was via a judicial review.

It is also important to note that the number of judicial reviews related to planning in 2021 represented just 3% of the total number of planning decisions by An Bord Pleanála that year (2,775).

Between 2019 and the end of June 2022, three out of four judicial review cases were lost or conceded by An Bord Pleanála.

In the case of judicial reviews relating to SHDs, the proposed developments were found to have ignored key environmental impacts on the locality or they proposed a material contravention of the local development plan without following process.

The high success rate of such challenges illustrates serious deficiencies in process and decision making, issues for which An Bord Pleanála has come under scrutiny in recent months.

In the meantime, many of the SHDs with an unchallenged planning permission have not gone ahead, suggesting the reason for delay lies elsewhere.

In the same speech to the Construction Industry Federation, Minister McGrath highlighted the need for “a planning system that we have full confidence in, while at the same time enabling the delivery of key projects in a timely manner”.

The answer to this is to improve decision-making, not to restrict oversight and accountability.

In the months ahead we have a number of opportunities to strengthen environmental democracy, oversight and accountability.

First, the emphasis of the overhauled planning system should be on improving decision making and oversight and promoting real public participation in planning and local development, without restricting access to the law and litigation.

Second, Ireland’s Civil Legal Aid Scheme, which is under review for the first time in almost 50 years, should factor in our climate obligations and provide for legal aid in environmental matters for both individuals and NGOs.

To ensure that the law is enforced, we need to ensure that people and groups know about the law, how it applies to their situation and have access to the courts and legal assistance, if that is necessary.

Finally, the new planning and environmental court must embrace the spirit and objectives of the Aarhus Convention, and provide for broad access to justice, including broad rules of standing and a limitation on costs.

Access to justice should be strengthened and promoted not restricted and threatened.

Rose Wall is an environmental justice solicitor and CEO of Community Law & Mediation (CLM), a community law centre and charity. In 2021, CLM established the Centre for Environmental Justice which works to ensure climate change and other environmental harms do not disproportionately affect those who have contributed least to the problem.

FULL SERIES IS OUT NOW

An in-depth investigation – published today – finds that the construction industry is lobbying to change the law and reduce planning challenges. An explainer - in July - reported that ‘deeply controversial’ last-minute planning law changes could lead to ‘years of litigation’.

This series was proposed and funded by readers of Noteworthy, the crowdfunded investigative journalism platform from The Journal. We also have a number of other projects focused on politics which you can view here.

You can support our work by submitting an idea, helping to fund a project or setting up a monthly contribution to our investigative fund HERE>>