CONDITIONS FOR POSTGRADUATE researchers are not addressed in the new career framework for researchers, according to SIPTU.

The Researcher Career Development and Employment Framework (RCF) was published by the Irish Universities Association (IUA) earlier this month. It states “the PhD stage is not included in the grading and salary structure set out in this Framework as it is not typically a salaried employment”.

SIPTU’s education sector organiser Karl Byrne said “there’s still nothing in that framework or anywhere else around problems that arise with PhD students”.

Currently “they don’t have things like sick leave, holidays or any of those rights”, added Byrne. “Even if someone were to become pregnant, they don’t have maternity leave.”

The Salzburg Principle was an agreement reached by the European University Association (EUA) on what should underpin doctoral programmes back in 2005. It stated: “Doctoral candidates as early stage researchers should be recognized as professionals – with commensurate rights – who make a key contribution to the creation of new knowledge.”

SIPTU’s Byrne said that PhDs “should be given commensurate rights” and has told the Department and employers, including universities, that also.

We believe that full stop. We would back that completely. That discussion needs to happen in Ireland.

In our recent Academic Uncertainty investigation into the call for workers’ rights by postgraduate groups, Noteworthy found that unpaid teaching contributions were expected in most universities and ITs but PhD candidates can’t get a liveable wage. You can read our findings here.

Through freedom of information (FOI) requests, we asked every university and institute of technology (IT) for the number of PhD students teaching, supervising or conducting other activities such as tutorials with no monetary compensation or as part of a condition of their PhD funding.

The full breakdown of information we obtained via FOI, is available here:

Click here to view this searchable table in a different window.

The “IUA is working on implementing the RCF”, according to a spokesperson. “It will provide clarity and transparency on the career progression pathways for researchers for the first time.”

The spokesperson said that the RCF doesn’t deal with PhDs but specific proposals have been made by the IUA to Government for increased funding for PhD stipends.

Lorna Fitzpatrick, president of the Union of Students in Ireland, said there is inconsistency when it comes to PhD rights and stipends – a tax-free grant that PhD students can be awarded.

At the moment an awful lot are on minimum wage, nevermind the living wage. The immediate step is to increase the stipend but the stipend isn’t available to everybody. There is not a single solution.

She is calling on an immediate increase in stipends which could be done “quite quickly and quite easily” but said that needs to happen in tandem “with an awful lot of other things”.

Not at the table

“The student voice is missing,” said USI’s Fitzpatrick. “The first step in this is getting all the relevant people in terms of the trade union, the students union and the representative bodies around the table with the Department to try to get something more concrete in place that will protect everyone.”

She added “the reality is that we need to provide a set of basic rights across the board for everybody”. Similar to Minister for Justice Helen McAtee, “there’s no provision for maternity leave so that brings in a whole area around equality and women’s rights”.

Fitzpatrick said the USI is aware that some groups “are working on different things but we haven’t been involved in any of those conversations”.

The Irish Federation of University Teachers (IFUT) weren’t involved in the development of the new framework either but were consulted shortly before its publication.

Deputy general secretary of IFUT, Frank Jones, felt that the framework set out to address those working as researchers after their PhD but there should be another document for postgraduate students. “In some countries it is a recognised employment, salaried and negotiated centrally.”

This is the case in Sweden where “PhD students are treated like full employees” with a “salary and other standard benefits of employment”, according to Stockholm University’s website.

There is a National Framework for Doctoral Education which is already in place for PhDs and has a key aim to underpin excellence in all forms of doctoral education, according to a spokesperson for the Department of Further and Higher Education, Research, Innovation and Science.

The spokesperson added that “any changes to this Framework would be a matter for the higher education sectoral bodies”.

Certain stipends given out by the Government bodies require that PhDs are paid for tutoring, yet others do not. For example, in the terms and conditions of the Irish Research Council (IRC) scholarships, it states: “Where award holders undertake such teaching or other duties as listed above, they should be appropriately remunerated… Any such payments will not affect the awardee’s total amount of award.”

In answering a parliamentary question related to this by by RISE TD Paul Murphy, Minister Harris said that “the Irish Research Council recognises that teaching is an essential means for the structuring and dissemination of knowledge and should, therefore, be considered a valuable activity within the award holders’ career”.

Noteworthy asked the Department to clarify what this meant and they stated:

There are a wide range of factors influencing the nature of any teaching arrangements including diversity of institutions, disciplines, programmes and research activities; the terms of any research funding award or stipend; the make-up of course fees and various other matters.

The spokesperson said that taking account of this, the Minister Simon Harris intends to “engage further with the Higher Education Authority, research funders and other stakeholders to seek further advice on the teaching activities of postgraduate students and consider the issue in more detail in the near future”. 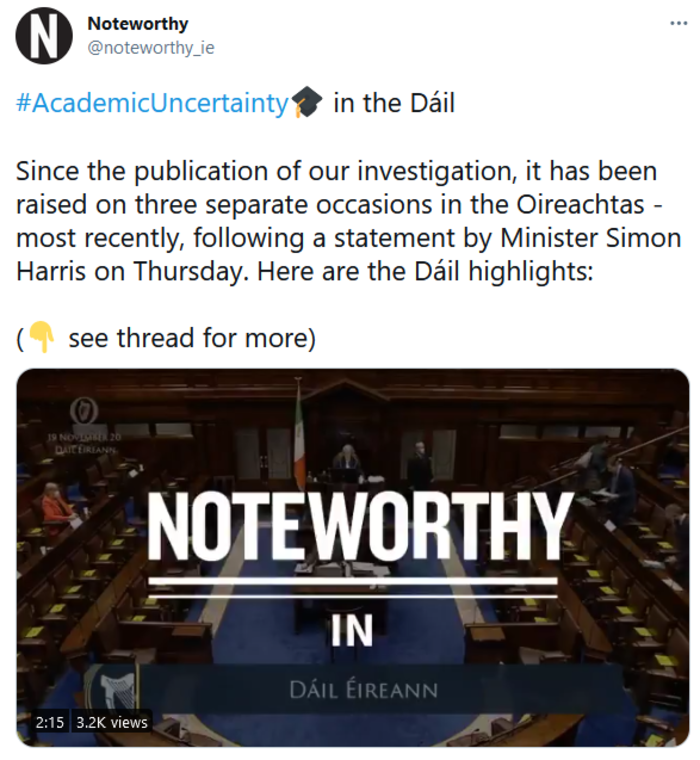 In terms of the new Researcher Career Framework , IFUT’s Jones felt the key stages of the researcher employee life cycle were a regressive move. These are detailed in the RCF for those who have completed their PhDs and are moving through the early stages of a research career. The seventh and last stage of the life cycle is ‘termination’.

In this section of the framework, it states “as postdoctoral appointments are fixed term and professional development appointments, it is important that the termination process is handled clearly and positively”.

The fact that postdoctoral researchers are essentially seen as a training role is an “almost ludicrous position [as] the graduate becomes the trainee”, explained Jones. “The training element should be done prior to achieving the award or qualification.”

Jones added that “if researchers realised from the offset the sacrifices and amount of work they would have to do to secure precarious employment, not too many people would engage in the path”.

The IUA did not response to a request for comment on this key stage of termination.